Home / Menopause / My menopause fight for the right treatment…

When I reached the age of 45 I hadn’t given menopause a second thought. Yet just six months later I had become completely consumed by it. 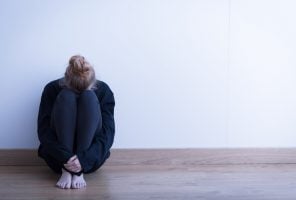 I hadn’t felt great for a few months, nothing specific, just tired all the time and no energy, even walking my dogs had become a chore. More worryingly I had become increasingly anxious and emotional and I was struggling to cope.

Finally my husband persuaded me to visit my doctor who took blood tests that showed I was seriously anaemic. I had struggled with very heavy periods for years but figured it was just part of getting older. My doctor prescribed iron tablets and told me to come back if I didn’t feel better. Two weeks later I was back feeling worse, more blood tests showed a significantly raised CA125, an indicator of, amongst other things, ovarian cancer. My mother’s diagnosis 22 years earlier obviously rang alarm bells.

The next few weeks were a blur of scans, blood tests and hospital appointments. I was convinced the first scan would be clear but suspicious growths on my ovaries along with a large fibroid and the rapidly increasing CA125 resulted in my gynaecologist advising a total hysterectomy including both ovaries. I remember leaving the hospital hand in hand with my husband with the tears rolling down my face. Hello surgical menopause!

The morning after surgery my gynaecologist came to see me and told me that the operation had been more difficult than expected due to lesions caused by my severe endometriosis. As a result my bladder had been damaged, only temporarily but that explained the bag attached to my leg! She told me that she felt surgery had been performed just in time.

Two days later I was back at home and soon after the lab results arrived confirming the endometriosis a large fibroid and adenomyosis but most importantly no malignancy. I felt incredibly lucky and thought I had cracked it. How wrong can you be…

Although I knew I was in surgical menopause, which the hot flushes confirmed, I had not been offered any advice or information at hospital and was told to go and see my GP. I was aware of HRT and had heard it was made from conjugated equine oestrogens (horse wee, yep you read that right) and I didn’t want that.

When I saw my GP I told her I didn’t want HRT and that I wanted to try the natural route, she said she would prefer me to take it but supported my decision to try an alternative method. At my first appointment with the natural menopause clinic I was prescribed several herbal remedies which I was told would ease my symptoms.

A few months later things started to rapidly go downhill. My confidence evaporated overnight, I became increasingly anxious, my heart would race and I couldn’t sleep at night. Each day felt darker than the last and I was dragging myself through. I became so insecure that I could not bear to be home alone during the day so my mum had to come and stay.

I couldn’t see a future and was sure nothing would ever be good again, I felt useless, hopeless, worthless, a total failure; a complete waste of space. I was convinced that I would never be myself again, I had lost all the joy from my world.

I felt sad, frightened and lost, I was drowning.

See also  Menopause and its effect on ageing

I had lost my ability to cope. I was unrecognisable; I had become reclusive, avoiding seeing friends and even phone calls. I had become completely non-functioning.

When another appointment at the natural menopause clinic had the nutritionist scratching her head I completely lost hope. I began to read forums when I couldn’t sleep and was shocked at the amount of women who were feeling like me. The next day I plucked up the shreds of my courage and called my doctor’s surgery for the details of my local menopause support service, and the receptionist simply said,’ Sorry there isn’t one’. What! It seemed ridiculous, and I promised myself if I ever felt better I would take action to change this.

A different type of HRT

Soon after, my husband reached his wits’ end and booked an appointment with my GP for that night. I sobbed as I told her what I’d been going through and she asked if I would consider HRT again. Even though I was feeling desperate I still didn’t want to use this product. She then told me there was a plant-based body identical alternative. Initially I breathed a huge sigh of relief but later I would question why nobody had ever offered me the choices before.

Just a few days later I started to feel like my old self again. This continued for several months, until I started to become anxious again, struggling to sleep. I did some research and the evidence pointed towards a lack of progesterone. As somebody who had been diagnosed with severe endometriosis I learnt that progesterone should have been prescribed for me.

So back to the doctors but instead of progesterone the doctor insisted I visit a heart specialist. I knew it wasn’t a heart problem and after two wasted appointments my heart was given a clean bill of health but I was still struggling. I went back to the GP again but was told progesterone could not be prescribed to a woman who’d had a hysterectomy. Next stop was an appointment with an NHS menopause clinic four months later. When the sleep-deprived day of the consultation arrived the doctor dismissed progesterone as a horrible hormone and suggested my doctor prescribe testosterone. I left the appointment feeling confused and angry.

See also  What causes early menopause and how to manage symptoms

I was getting desperate so contacted a clinician-led menopause website, within a few days I had a reply to my email advising that I absolutely should have been prescribed progesterone. I took this reply to my doctor and finally received my first prescription for progesterone, almost three years after my surgery. Within days my sleep and anxiety had improved and the heart palpitations had disappeared.

The events of the last four years have changed my life, my own experience has made me realise just how much there is to do to improve menopause care and awareness. I wanted to have professional clinical knowledge so attended nurse training on menopause.

I have kept the promise I made to myself and have now created the support service that I needed, offering support, advice and information to women and their families.