When it comes to HRT, it can be hard to separate the facts from the fiction. And with so much conflicting information, it’s no wonder that women are becoming increasingly confused. 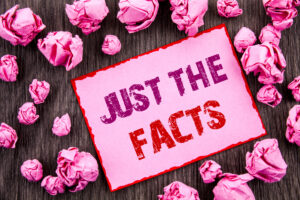 So here are common myths about HRT, along with the actual facts.

You have to wait for your symptoms to be really bad or even unbearable before your doctor can give you HRT.

Many women delay going to their doctor and asking for treatment as they feel that they are wasting their doctor’s time and should wait until their symptoms are really bad.

This is not the case as HRT will help even if you have mild symptoms. In addition, there is increasing evidence that the earlier HRT is started, the more you will get protection from osteoporosis and heart disease.

Many women avoid taking HRT as they think that they will then have their menopause. Any symptoms you might experience after stopping HRT are menopausal symptoms you would have experienced even if you had never taken HRT.

Without HRT, many women have menopausal symptoms for more than a decade and some women still have hot flushes when they are over 75 years old.

FALSE (for some types of HRT)

However, if you take the oestrogen part of HRT as either a gel or a patch it gets absorbed directly into your body and then is not associated with an increased risk of clot.

HRT will cause heart attacks and strokes

Taking HRT when you are under 60 does not actually increase your risk of developing a heart attack. Those women who only need to take oestrogen (without a progestogen) actually have a lower risk of heart disease compared to women who do not take HRT.

You can’t take HRT if you have a migraine

Many women notice that their migraines worsen as they go through their menopause. As you can’t take the oral contraceptive pill if you have a history of migraines, many women (and doctors) incorrectly think that you cannot take HRT if you have migraines.

If you have migraines, then you should take oestrogen as gels or patches rather than as tablets.

You have to stop HRT after five years

Many doctors try and encourage women to stop taking HRT after five years. However, there is actually no good scientific reason for this.

I hope this has clarified some of the more common confusion about HRT myths and facts.  There are many different options available and it’s important that you know the facts.

If in doubt, speak to your doctor, read the NICE guidelines or talk to a menopause expert.