Menopause wasn’t something I ever thought about, until I suddenly noticed my body changing when I was just 38. And the impact it had on my life and career was pretty severe. 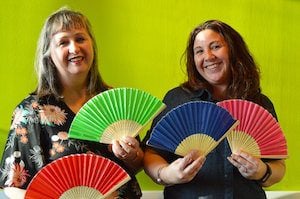 I’ve been a police officer for 15 years, nine of them in the Public Protection Department, which is a very busy place. And to add to my stress, I found I was forgetting what I was supposed to be doing, feeling constantly exhausted and like my energy had been zapped out of me.

I’d gained some weight around my middle, had a sudden onset of headaches, just feeling dreadful all the time for no reason.

I was always the life and soul of the party. But now I was changing. My outlook on life was getting bleaker and I started to get anxious about stepping out the front door. Plus my periods – before they did eventually stop altogether – became increasingly heavy.

Not something you could openly discuss in a male environment or tell a supervisor that actually you could really do with going for a quick shower or a change of clothes.

Working with detectives. I don’t think I would get away with changing my clothes and nobody noticing….

On a routine visit to the practice nurse I mentioned what was happening and she suggested I should have a blood test to rule out anything untoward and to confirm that I wasn’t going through the menopause.

So off I trotted for the test, not thinking of anything at this stage. Surely I was far too young to be worried about the menopause? Little did I know that this was the beginning of my menopause journey…

The doctor confirmed I had no oestrogen left in my body and this was the cause of why I was feeling so tired. It was then that it started to dawn on me I had reached a peak in my life. A place that I’d never given much thought to. Nobody had ever discussed the menopause with me. I don’t remember talking about this at school – I thought it was something that happened to you when you get old.

Around this time things started to move quickly… I realised I could no longer have children and how did I feel about this? To be honest, I had never really thought about whether I wanted any more children – it was something I thought I could always think about later on.

See also  Long-term health and menopause: what you need to know

The GP told me I needed to start taking HRT immediately. If I didn’t who knows what could happen to my body in the future – osteoporosis, cancer, heart disease. Things I have never thought I needed to worry about at my age.

This was my journey onto HRT, and I was told I would start to feel like a new woman…

However, the first lot of HRT made me feel like I had been hit by a bus. The tiredness took over me, the depression started to sneak in… I started to get anxious about going to work.

Every morning when I woke up I opened one eye to see how today would be. I knew if I woke up feeling like I had been partying all night on alcohol today would be a bad day. It was always a bad hair day, my clothes didn’t fit me; I would swell and bloat so much with the HRT. My head hurt. Nothing would take the pain away.

After a few weeks I could take no more. No more HRT. In the meantime I had my first hospital appointment. I didn’t know how serious this menopause business could be. I sat in front of a gynaecologist consultant telling me how my life would not be the same again. I had to get used to a new me and I should say goodbye to the old me.

I didn’t want to. I wanted the exciting me. The one that would chat and smile at everybody… now all I wanted to do was hide away, not speak to anyone not see anyone. I had become so anti-social.

How my menopause in the police force affected by career

As months went on, I tried numerous HRTs, patches, tablets. Nothing worked. I would take them for few weeks and new side effects would appear. The headaches were getting worse. The feelings of not wanting to get out of bed in the mornings were now a permanent fixture. I loved my job but I lost the confidence of who I was. I aspired to be a sergeant in public protection, however I didn’t even know if I wanted to be a police officer any more. I had doubts that I was able to do the job I once loved.

I would spend afternoons staring at my computer screen, feeling exhausted from not sleeping the night before. My concentration levels were at an all-time low.

The hot sweats started and I felt like my whole body was on fire and people could see me getting red. I was a stranger to myself.

My partner was very supportive but he didn’t really understand what I was going through.

My sergeant was a female so I could tell her when I was having a bad day. I was referred to Occupational Health but what could they do? I was doing everything I could do to help myself. I changed my diet, started exercising, even listened to the 10-minute relaxation programme on my phone every day when things started to get bad.

I explained to the Occupational Health department about the side effects of the HRT and the restrictions that I was feeling. I asked if there was any guidance or policy or support in place for menopausal women in the force, to which the reply was “no” it was down to line managers to put in support. I was also asked if I was sure I wasn’t suffering from stress and how did I know it was the menopause? Was I really the first female officer in the force to raise the issue of the menopause?! I’d like to say, though, that this was at the time, and fortunately things are changing now and moving in a much more positive direction.

Eventually the side effects took over and one morning I just couldn’t do it anymore. I was driving to work and it hit me. This wave of anxiety, I couldn’t face the job, the work. My headache by this time was permanent. Nothing touched the pain. I decided to stop all the HRT and go against my doctor’s advice.

I was feeling depressed and just basically had enough of feeling so crap. I couldn’t understand why I was feeling this way. I knew it wasn’t an illness. My positive outlook on life was gone. My new life was filled with dread.

On this occasion, a new GP gave me an HRT alternative to try called Amitriptyline. This was a miracle drug. After just a few weeks my headaches started to decline and some of my other symptoms showed signs of disappearing. I started to get stronger – I still wasn’t my old self and I still didn’t like the new me but I saw light at the end of a tunnel. I returned to work with an idea of the reasonable adjustments that may help me get back on my feet.

See also  Men and menopause: what do they really think?

I started to research on the intranet about the Force’s stance on the menopause. I wanted to find others experiencing what I was going through, so I could talk to them and get a perspective on how they coped with balancing the menopause, shift work, medication and everything else in life.

I could not find any answers but what I did do was begin the conversation… I started to talk about my menopause with anyone who would listen. I would hear other women telling their stories and comments about going through the mental pause!  Some had no issues and some had dreadful effects like me.

It wasn’t long before I met with a group of people that were all focused like me and on a mission to change the way the menopause was perceived and handled within the workplace. We needed to make a change in the police force and it needed to happen today. We wanted to raise awareness on the menopause in a positive and a productive way.

Hopefully I can encourage others to get talking about the menopause and help them to not feel isolated in the workplace.

I am currently working with others in laying the foundations for our Force guidance on the menopause. We need to educate people and hope that by talking about it we are raising awareness and promoting the menopause in a positive way. Not everybody has a bad time. The menopause affects each woman individually. We need to ensure that there is support for women who do suffer and educate the workplace that line managers may need to look at reasonable adjustments for some females. This is a condition that shall not last forever, I hope.

I refuse to give in to the stigma attached to the menopause and actively say it is okay to have a bad day and not to feel ashamed or embarrassed.

Let’s start talking about it!

How menopause-friendly is your organisation? Download our FREE checklist today by clicking here!

Or get in touch: Menopause@henpicked.net