World Reflexology Week is upon us, taking place 18-24 September 2017. But what is this event, and why do we have a week devoted to promoting reflexology?

Launched back in 2000 by the International Council of Reflexologists, it was initially celebrated by 32 countries, but has since grown into a truly global event. Its original purpose was to promote the idea of a ‘healthier world’ but has since moved into more specific areas such as stress in the workplace.

Many reflexologists use the opportunity to raise money for community or global projects, advertising their businesses at the same time. They have special offers, give talks and demonstrations and aim to get as many people as possible aware of the benefits of reflexology.

I remember as a student having to design a brochure that defined and advertised reflexology. It was one of the most difficult things to do! The history, however, is fascinating.

Historically, there would appear to have been types of reflexology around for centuries. Part of Traditional Chinese Medicine, Chinese Reflexology is the ancient art of working pressure points on the feet, hands and ears that correspond to different parts of the body. Early evidence of Chinese Reflexology dates back to the 2nd century BC, when Dr Yu Fu treated patients without the usual herbs and acupuncture but concentrated solely on massage.

Native Americans, Incas, Aztecs and many African tribes also practised the art of massaging the feet to promote good health 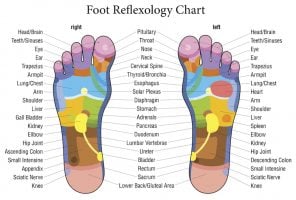 Modern reflexology is less than 100 years old and is based on the theory that manipulating points on the feet, known as reflexes, will promote a state of homeostasis (equilibrium).

Each reflex relates to a body part, so the physical act of applying specific pressure using thumb, finger and hand techniques result in stress reduction which causes a physiological change in the body.

There are many types of Reflexology now: Vertical, Lymph Drainage, Reproflexology, Cranio-Sacral, Meridian, Foot, Hand, Ear, Face and others. A rather bewildering array!

If you fancy trying one or more types of reflexology, World Reflexology Week is a great opportunity to experience a treatment at a much-reduced price. Why not search and see if a reflexologist near you has some offers during 18- 24 September 2017, and support a good cause at the same time?