Home / Making a difference / Charities / World Fair Trade Day. Will you be ‘an agent for change’?

Despite being an enthusiastic supporter of Fair Trade and involved for many years with Fair Trade Fortnight, I was not aware that there was an official World Fair Trade Day until recently.

However, a visit to the World Fair Trade Day website revealed some interesting facts and very thought-provoking articles. 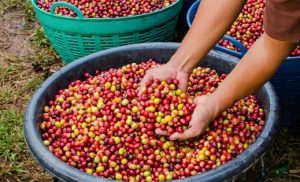 So, first things first. What is Fair Trade?

It has ten principles which include transparency and accountability, no child or forced labour, good working conditions and a non-discriminatory approach, giving opportunities for economic empowerment to women on an equal basis with men.

To my surprise, I found out that the Fair Trade movement is over 50 years old. I first became aware of it in the 1980s when churches and charity shops began to sell Traidcraft jewellery and Cafédirect beverages.

Another surprise was finding out that Fair Trade didn’t start as a charitable or activist initiative but as trading partnerships between the USA, Europe and small-scale producers in Africa, Asia and Latin America.

From small scale to international industry

To the cynic, its slogan of ‘Trade not Aid’ might be seen as a way of powerful economies shirking responsibilities for global development, but this is broadly supported by some leading African thinkers like Dambisa Moyo. Moyo argues that while there is still a place for emergency aid, free trade and investment in infrastructure are more effective in creating sustainable positive change.

In its early days, Fair Trade was small scale both in terms of production and consumption and supplied niche markets and specialist shops. It was seen by some as all very well for hippies, environmentalists and vegans who were happy to live on brown rice, raw cane sugar and wear shapeless garments made of tie-dyed indigo organic cotton, but not mainstream.

As we’ve seen a growth in concern about the conditions in which producers live and work to provide foods like bananas, tea, coffee, sugar and cocoa, however, the movement has gained support.

Many multi-national companies now offer Fair Trade lines, which we might think of as a really positive step. However, World Fair Trade Day president, Rudi Dalvai, argues that we have effectively two parallel Fair Trade movements now. He wants to see the small-scale, traditional movement protected because this is at the heart of providing opportunities for economically disadvantaged producers and those who make hand crafted products.

While he cautiously welcomes the multi-national involvement, he is concerned about what is called ‘fair washing’, where a product can be marketed as Fair Trade even though only a small number of its ingredients actually are.

Multi-national Fair Trade is also about the corporates owning the plantations and paying a fair wage to their employees, rather than small-scale owner/producers themselves having direct access to global markets.

So, what is the future for Fair Trade?

There is considerable concern about TTIP and CETA, the proposed trade agreements between Europe, America and Canada. This feels sadly ironic when Fair Trade began with these countries.

Liz Murray, writing in Global Justice Now in March this year argues that:

“On a global scale, the main losers from TTIP and CETA will be developing countries, who are expected to suffer dramatic losses in market share from intensified competition in the EU and US markets.  The Fairtrade Foundation suggests that loss of income from TTIP in Côte d’Ivoire could be £1.28 billion and in Bangladesh as much as £2.21 billion.”

What can we do? It’s easy to feel powerless as individual consumers in the face of global economic forces, but World Fair Trade Day 2016’s theme is ‘Be an agent for change’.

In recent years, online campaigning communities like change.org, Care2Causes and 38 Degrees have demonstrated the power of citizen activism. So we can support Fair Trade through these platforms.

Perhaps we can also think about what else we can buy that is fairly traded. The production of Fair Trade flowers has grown considerably in recent years, with 50,000 people now employed in this sector in Kenya. One of my personal favourites as a knitter and yarn hoarder is alpaca fleece spun and dyed by a workers’ co-operative in the Andes.

What about you? Will you ‘Be an agent for change’?