Marianne Coleman interviewed 60 senior professional women to find out what women at the top really think. 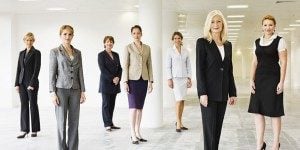 In the course of my work I have been lucky enough to indulge my curiosity about people and what makes them tick. As a woman academic working in leadership education, I have been able to follow up my interest in why there are relatively few women leaders, even in areas where women dominate, like education and medicine.

A couple of years ago I interviewed 60 senior professional women, ranging from CEOs and board members in retail, finance, power and media to consultant surgeons and head teachers of secondary schools. A book, Women at the Top: Challenges, Choices and Change, was the outcome.

What did they think about gender barriers? Without exception, although with different strengths of feeling, they recognised that women were disadvantaged. An example from a woman in media:

When I first sat on a group board there were two or three on the board who were misogynists. You would be quite shocked. It did exist, but it never stopped me. There were enough other people to balance it out. It was shocking though. It was not as if we were in manufacturing, or in a sector where you might expect it…You are either tough and stand your ground, or you are undermined if you are not confident. I have seen it happen to some of my friends.

However, not all work places are the same. The media industry could be argued to be much more women-friendly than, for example, the City, about which one interviewee said:

It comes down to reward mechanisms. If the thing to do is to roar down the street in a Ferrari in front of your mates, they [the men] will kill for that. A woman who is content with a bonus of £5 million not £15 million is not even playing the game on the same terms. There are terrible culture clashes [for women].

When it came to dealing with the challenges, the important factors identified by the professional women were:

I was lucky that I had mentors who gave counsel. You need to be able to talk to someone who can be a sounding board.

Networking seems to be a vital factor for success. The women belonged to many networks for making work contacts, but women-only networks were generally highly valued for the personal support they offered. One woman likened joining such a network to “getting into a warm bath.” Another said:

You find you can talk in ways that are different. There is a sort of camaraderie. One is not let down. There is something about it – no one believes it till it happens.

The choices that women make include gendered choices of subjects at school and university and the resulting choice of career, but, perhaps most importantly, choices relating to their decisions about balancing family and work responsibilities:

Of the women I interviewed, less than 50% had children (even today when childlessness is increasing, 80% of women born in 1965 have children). Some had chosen to remain child-free; some could not have children. Of those who had children, they had either had them early, or late, or were able to afford expensive childcare options, like employing a nanny (or even two) – an option that is not available to most women.

There are also issues about hours. Although industries differ, I had examples of professional women talking about 9 – 5 being part-time work and about the impossibility of combining a job that necessitated international travel with being a parent. However, they realised that finding solutions to work/family tensions is not just a problem for women, as increasingly men want more involvement in family life.

See also  Jobs for the girls

Whatever the women did there were issues. One woman described the conflict she feels and the stresses and strains of trying to do it all:

I have a fantastic nanny who is a grandmother figure who really loves my children. The toll on me over the last five years is really difficult. I was very ill and had to have six weeks off. I have tried hard to be a good mother and to run a company. I would be distressed if my kids went through the same thing. Working mothers finish a day at work and then come in and move straight into mother mode. It’s hard. However, I would not want it any other way. I love my kids.

The older women referred back to the very difficult circumstances they had faced, with stories of rampant sexism, bullying and discrimination. For the younger women, discrimination had been much more subtle.

However, old attitudes die hard, and one interviewee reported that even in the 1990s, when she told her employer that she was pregnant but intended to continue working, he responded: “No wonder there are so many problems in the world.”

The massive changes that have occurred in the last hundred years see 70% of women with dependent children working, and women and girls out-performing men and boys at schools, in universities and on the first rungs of the career ladder. Of course there has been equal opportunities legislation, for example the Equal Pay Act, and the introduction of maternity leave to underpin change.

However, the rate of progress for women to the really top jobs is incredibly slow to change. The Equality and Human Rights Commission (EHRC) in their last report on the subject (2011) stated that at the present rate it would take 70 years to get an equal number of men and women directors on FTSE 100 Boards, and 45 years to get an equal number of women in the senior judiciary.

See also  How to start running your business from home

Despite this, it is often said or thought that the battle for women’s rights is over. Certainly many women are now unwilling to say that they are a feminist; somehow the term has taken on connotations that make women unwilling to identify with it. Although all the women interviewed were supportive of other women, there is virtually no evidence of them seeing themselves as feminist.

The changes that the interviewed women referred to were those that allowed them to adapt their lives to combine family and work effectively, including working flexibly and the use of technology. These changes meant that they could continue work at home in the evening – not necessarily the best idea in terms of health and welfare.

One way in which society has changed, and will continue to change, is that work-family balance has become more important to us, whether we are women or men.

I loved what the women revealed about themselves and the process of identifying the themes that emerged from their stories. What next? Well I am now (more or less) retired and, as well as looking at women in work, I have been increasingly looking at what it means to be retired and at the whole process of retirement and ageing. More later….