It’s a sorry sight in any office, the harried working mother, eyes bright with lack of sleep, a spot of sick on her shoulder, mobile phone at the twitch. 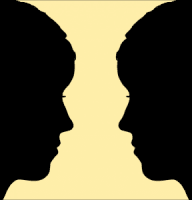 Instead of throwing herself into her work she must play it like a game of Whack-a-mole, delivering the marketing brief before the forgotten PE kit, dialling into a meeting during her toddler’s nap, stretching herself so thin you can almost see through her pale smile. She’s exhausted, distracted, and barely earning a penny once the second mortgage’s worth of child-care is paid.

All in order to give her son or daughter the same opportunities she had. Until she had them.

This conundrum, it seems to me, is like the classic optical illusion of the vase and faces – mother/worker/mother/worker – and just as unsolvable as currently framed. There is no way that women can do it all, because it all happens at the same time, but in different places.

Working part time promises a fair balance, but not if your child falls ill or the Big Conference falls on a ‘non-working’ day. Further, finding part-time work at your former level of competence, never mind salary, is virtually impossible, and many working mothers return to lower-paid, low-status jobs with the gracious resignation of the asylum-seeker-surgeon-cum-taxi-driver.

An American who lived many years ago once said, ‘A house divided against itself cannot stand.’  So here’s my proposition: do not divide the house.

Now I would never advocate indentured motherhood or involuntary sterilisation, which would be inhumane. Rather my solution champions a woman’s right to self-determination and allows her to choose for herself, when she reaches puberty, what she wants to become: a Businesswoman, or a Breeder. Full stop.

See also  Is the telephone still a trusted sales tool?

She would then go up to the appropriate secondary school to equip herself for her future. The Business School would provide vocational and professional training in the career of her choice, golf lessons and a Prada suit (at a student discount), whilst Breeding School would skill up the mother-to-be with the child-care knowledge and confidence to raise the future of our nation, a signed Annabel Karmel cookbook and a supply of scrunchies.

Yes, 11 or 12 may be young, but you don’t need an A-level in chemistry to mix baby rice and milk. And if you’re going to be a kept woman there’s little point in dating anyone who’s more interested in you than in their work. Girls of either aspiration would grow up with realistic expectations and realisable goals, and not waste their twenties wandering up a diverting path, to a cliff-edge.

Those who aspire to intellectual or financial success pursue a career without interruption, guilt, or gradual frazzlement. They’ll never miss a board meeting – or a promotion – or feel torn between paid work and housework. Without distraction, women will swiftly close gender gaps in the workplace (a level playing field is irrelevant when one side is tripping over Lego pieces).

This is not to devalue the domestic path. Quite the contrary. Wholly committed Breeders could now become mothers par excellence, raising happy, successful children with unstinting and indefatigable attention and additional trips to Kumon and extra swim practice. Professionalised, mothers could form unions, and earn relevant qualifications (Master Mother, perhaps?). And for the very best, of course, the Nobel Prize for Mothering.

My scheme ticks all the boxes.

It aids benefits reform – tearing down the complex (and incomprehensible) schemes of maternity pay, child tax credits, working families tax credits etc, and using the cash instead to provide a fair wage for mothers (perhaps with performance component).

It lets business get on with business. The loss of 40% of the UK workforce could be partially offset by even longer working hours for everyone else.

In today’s world, it’s a no-brainer.

And so much simpler than crackpot ideas requiring real ingenuity, or cash, like aligning working hours to the school day; or free child-care during the working day; or shedding maladaptive historical business practices; or making it truly acceptable for men to be primary caregivers so that parents can choose who stays at home, and when; or supporting women entrepreneurs and consultancy agencies flexibly deploying mothers’ professional skills; or other home-based working or work-place child-care arrangements, or delayed schooling or any of the New-Agey schemes dreamt up by our Scandinavian friends bedazzled by the Northern Lights.

Sure, it might need tweaking here or there. But I would urge anyone objecting outright to my proposal first to ask any working mother whether, in retrospect, given a workplace shaped in her absence, she might perhaps rather have had somewhat less choice, and not spent the prime of her life building a career and expectations of intellectual and financial reward, only to be cut off at the knees the moment she gave life to another, and to forever feel guilty about lamenting, in part, the exchange of that life for her own, for no matter how much she treasures her children, she had not in fact wanted to become a mother, but to become a mother too.

See also  Why your business should go cashless... and how to do it

Because it is not a question of whether one looks after the children, but of who looks after them, and when and how. And until the Victorian workplace catches up with the Elizabethan workforce, there is no real choice, for woman, man or child.