Home / Happiness / Why is the language of ageing so negative?

Doing some research on different hormones and their roles in the menopause, I was truly horrified by the language in so many of the articles I read. 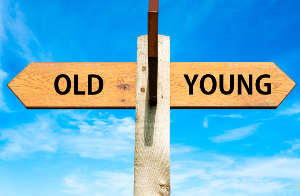 In each one words like depleted, at risk, sagging, slackness, dryness, atrophy, infection, incontinence, brittleness, loss and decline leapt out at me from the page.

Having contributed for almost six months to a discussion group for women on the menopause, and having treated women for the symptoms of the menopause, I cannot help but wonder how much fear of becoming this dried, depleted, fading figure contributes to the way in which women suffer.

I’m 47. I’m perimenopausal and my periods have decided that it’s time to have a party. Sometimes they come home late. A couple of months late. Sometimes they arrive like the Valkyrie with power, pomp and circumstance.

I’m working on it. With diet, exercise, meditation and a little bit of kindness to my body, but I’m also working on my mind because this is the bit of me having the worst time right now.

The right to be respected

Growing older used to come with an automatic right to respect. Rightly, in my opinion, we have to earn respect. There are some very respect-worthy young people out there and some septuagenarians I know who my inner five year old thinks could do with a slap (I do not really condone violence).

However, I feel that older people and particularly older women really need to reestablish their credentials for full membership of the human race.

My mother has terrible osteoporosis. Partly due to long undiagnosed coeliac disease and partly due to living through the Dutch famine in the Nazi-occupied Second World War Netherlands. However, osteoporosis is not necessarily something I need to look forward to. I need not be brittle. I have been doing weight-bearing low-impact exercise most of my life – I do include carrying heavy grocery bags, children and the extra 40lbs of over indulgence in this list.

My mother has a strongly lined, soft, crinkled face, which I love. It’s beautiful. She’s my mother and of course I love it. However, she smoked 40 a day for 30 years. I don’t have the damage caused by nicotine and the other toxins cigarettes contain, my skin doesn’t sag because it isn’t an inevitable part of my female genetic pathway. My life and hers have been very different.

I eat more oily fish and avocados and nuts and seeds and there is no reason on this earth that my poor skin should become paper thin and vulnerable as hers did in her late 60s. I will not tear on thorns in the garden. I didn’t spend years gardening unprotected in the sun or working outside in The Outback.

The things that happened to my mother are her story. I love her, I respect her and I owe her so much. I owe her the fact that her story will not be mine. So I look at the words that the academic literature, the magazines and the books are using to tell her story. Not the truth of her life but negative, mean disparaging words that erase her humanity and the humanity of the millions of women who have passed through this right of passage we call menopause.

I choose positive words to describe my future like choice and soft, and nourished, and strong and wise.

And I challenge the world to do the same, for our journey should not be shaped by words chosen by dispassionate others.