Most of us will eventually go grey. It’s a fact. But the important question is why? 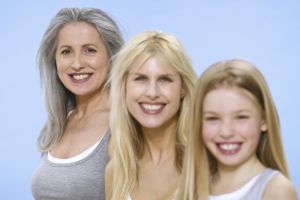 Surely if we know the answer, then it follows that we should be able to stop the grey creeping in at all?

As you can imagine, however, it’s not that simple. When I began my research, I discovered that there are so many genes, enzymes and environmental factors involved that it’s very difficult to pinpoint the one that’s most important.

As I dug deeper though, I discovered some amazing information.

Let’s begin with the most commonly quoted fact: as we age, the cells called melanocytes that produce the melanin (or pigment) that gives both hair and skin its colour, slow down their production of melanin, and eventually stop producing it altogether.

When we actually begin the greying process is often genetic. Beyond genes, a variety of lifestyle factors also affect hair colour. Smoking, UV light, pollution and stress may make a contribution too.

Hmm, so it might be my own fault as well?

Compounds, chemicals and a whole lot of enzymes 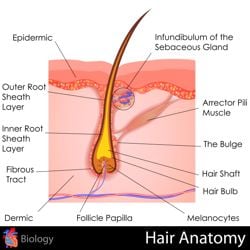 My next discovery was that European scientists believe that going grey is caused by a massive build up of hydrogen peroxide, due to oxidative stress – that’s basically wear and tear to you and me – of the hair follicles.

This peroxide ends up blocking the normal synthesis of melanin.

Apparently, researchers have already tried that with the skin condition vitiligo (pale patches on the skin). They applied a compound and the pigment came back.

Hurray, I hear you shout. Give me the name of the compound and I’ll try it. Unfortunately, it’s more complicated than that. Applying the peroxide-reducing compound directly to the hair follicle doesn’t work.

So, on with the research.

So can we take these enzymes to boost our stores? No, because the high levels of hydrogen peroxide and low levels of MSR A and B disrupt the formation of another enzyme, tyrosinase.

Eureka, take this one then? No, because yet another enzyme, catalase, also counteracts the body’s natural production of hydrogen peroxide.

Remember those other things I mentioned earlier like smoking, UV light, pollution and stress? Allegedly, they play a large part too:

Plastic surgeon Darrick Antell MD has studied pairs of twins who are genetically identical but have followed very different lifestyles in terms of diet, stress levels etc. He notes that, amongst many differences in their appearances: “Twins who smoke also have more grey hair.” A good reason, if you need another, not to smoke. 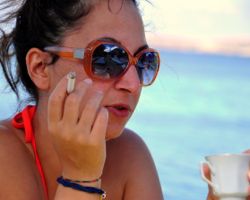 “Ultraviolet radiation is considered the most damaging of all environmental factors. Radiation is responsible for the photo oxidation of amino acids in the hair cuticle.

READ  Is my afro hair political?

These amino acids play a key role in the stability of hair protein. Photo damage of such amino acids [e.g. cystine] leads to disulphide photo oxidation, destroying the overall integrity of hair keratin.”

So what do I do, cover my hair whenever I go out? This is getting ridiculous.

Frequent exposure to pollution has an adverse effect on hair, making it look dull and unhealthy and leaving it weak and prone to damage. Excess hair loss is also a result of pollution.

To protect your hair from pollution, you need to wash your hair regularly and have it trimmed every two or three months.

It is known that stress uses up vitamin B and some studies have shown that certain B vitamins taken in large doses can begin to reverse the process of greying. As a result many supplements marketed as anti-grey are simply multivitamins with very high doses of B vitamins.

By this stage, I was losing both the will to live and any trust in science I might have had before I began my research.

But maybe there was a pill anyway? I did a search. I didn’t believe it, but there they were, miracle pills, containing vitamins and enzymes and – because they are not drugs, but food supplements – freely available.

A bargain? Well, the reviews are mixed and it seems that the earlier in the ageing process you take them, the better the results. I suppose, like many other things, it depends on your individual make-up.

The best story I found, however, was by someone called Wayne, which you can read here. He suggests that, underneath everything, despite what we think, maybe we just expect to go grey.

READ  Natural oils: the perfect way to nourish your hair

So if we work at eliminating that belief, maybe we can stop the process. When I think back to my own experience, I can see that might be what I did. My mother was grey at 33 and when I found I was going grey in my early 30s, my reaction was simply that I was following in her footsteps.

In the meantime, because of all the research, the trichologists and scientists all firmly believe that, within the next 10 years, there will be credible products that can prevent grey hair.

Until then, the best preventative measures you can take are to ensure you have a balanced diet that’s rich in antioxidants and not deficient in vitamin B, avoid cigarettes and, as far as possible, other environmental pollutants.

And finally, if you’re not prepared to go grey gracefully – keep the number of a genius colourist on speed dial.