Home / Happiness / Family / Where do you put your parents?

“I’ll go into a home as soon as I can’t take care of myself. I don’t want to be a burden on anyone.” 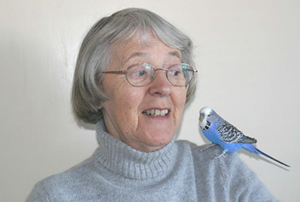 I’ve seen two generations – my gran and my mum – both say that. Both were determined to show that they could still take care of themselves, way past the point where their lives at home had become far too difficult to sustain.

Both of them had spent 40 years in their own houses. My gran was in a tiny two up, two down terraced, built as part of a groundbreaking social housing project in the 1920s, with a bathroom and a plot to grow your own vegetables. My mother lived in a four bedroomed modern house, and she used all of them for her art projects.

My gran was fit as a lop, and could easily walk a mile into her 90s. Her problem was that when she got there she forgot why she’d set off. She could do a fine job on social services, convincing them she was doing brilliantly, making them a cup of tea and giving them home made biscuits. But if they’d looked in the fridge they’d have found a bag of washing, and in the washing machine there were mouldy apples. Upstairs the two rooms were packed with piles of Crimplene dresses from jumble sales, all too small. And probably a pound of sausages.

My gran didn’t want to leave her little house, but once she moved into the home she blossomed again. She had people around her to talk to and to make sure she ate properly. We – and she – were very fortunate.She went to live in a lovely home in central Middlesbrough, not far from her house, with people she knew. She had worked on the ambulances during WW2 air raids – a dreadful job that involved removing body parts from bomb sites – and was given a free place in this rather exclusive Council-run home, for her services to the town. She helped the less physically able residents, and was sent off for the shopping – as long as she stuck to what was on the list. 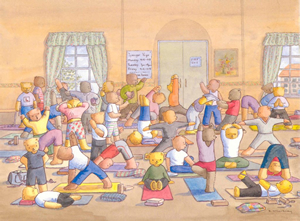 My mother was different; she had Parkinson’s. Her house was tidy to the point of obsessive; she used cleanliness to show that she could look after the place herself. But if she fell over – which she often did – she could be there for hours because she didn’t have the strength to get up. Her great love was painting complex watercolours of everyday scenes, populated with teddy bears. Once she was unable to control a brush precisely, she took to broad stroke flower paintings, but that became impossible too and she spent a lot of the time just crying.

After a particularly bad fall when she banged her head on the pavement kerb, she was in hospital, then a rehabilitation unit, for months. Social Services then had her on their records and she wasn’t allowed home until there were bars fitted for her to hold on to, and she’d passed the tests to show she could cook. She was also sent carers to dress her and put her to bed.

My mother had imagined that carers would sit with her, have a chat and do all her shopping – the kind of thing that her friends and family did when we visited.

What really happens with social services care is that someone on minimum wage has five minutes to whip off your clothes, stick your nightie on and bung you into bed before dashing off to the next one.

We were very lucky that my dad had saved more than he spent of his office manger’s wages. This was to take care of my mother in case she was left by herself. It meant that for a while we could pay for a private carer to come in three times a day and cook her meals, sort out her mountains of medication, get her in and out of the shower, empty the commode, dress and undress her. She even did the laundry, which my mother complained about because she’d never experienced fabric softener before and was convinced that her vests were still damp because they weren’t hard and crispy when they dried.

But this was unsustainable; it was ripping through the savings, particularly when my mother insisted that someone stay overnight with her, every night, to help her out of bed when she wanted to use the toilet.

And still she maintained that she was managing perfectly well without any help from her two daughters. (Although I was there five days out of every fortnight, greeted with a list of tasks as long as my arm each time I turned up.)

Finally my mother asked my sister and me to arrange a place for her to live. She said she couldn’t bear the thought of another winter there by herself, so would we please find her a nice place in York, close to her grandchildren.

(We found out later that she’d told all her friends that we were forcing her to leave her own home, in order to get them to feel sorry for her. We found out lots of things later that she’d said about us, but that’s another story. But we did wonder why we got such scowls from her neighbours when we visited…)

Briefly then, she moved to a home, the one which everyone in York recommended, and lived there for three years. It was an immense relief to know that it was someone’s job to look after her, and that if she had a fall, there would be people to pick her up.

So for five years things were very tricky, but we were fairly lucky the way it turned out.

That time when you realise your parents can’t quite look after themselves, but they aren’t going to admit it – that’s the difficult part.

And many of my friends were going through the same thing, or had just been through it, and some are going through it now. Two of us considered setting up our own residential home so we could do it better ourselves. One thing I’ve observed is that the difficult part if bad because it’s uncertain. You’re trying to do what your parents say they want, but you know you’re probably going to have to make a tough decision and get through it.

These are some of the things that our family learned that might come in handy:

See also  Can mothers have it all?

We’re all different, and we all have individual relationships to our parents, so if you have something to share, please do join in.