Home / Time off / Where are all the odd socks?

Have you ever wondered? 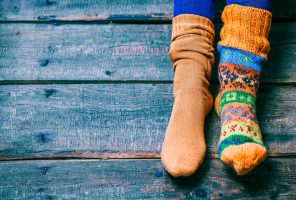 One day I noticed that, as a family, we were amassing a great deal of odd socks. So many, in fact, that I began to keep a drawer especially for them – about 20 to 30 socks idly waiting for their other halves. I suppose we could have just worn them, like my dad who prefers it (the stripier the better). But, like a lot of people, I prefer to wear a pair, and the black, kitten socks just didn’t look right next to the Christmas reindeers.

So, as the socks kept building up, I began to get fed up with the lack of a pair, and I started to complain to my mother-in-law, my husband, my kids, and my friends.

“Why are there so many odd socks? Where have they all got to? Isn’t it annoying?” And they nodded and we all shook our heads about how many odd socks we had all ended up with. But the odd sock drawer just kept filling up…

Until, one day, after complaining to my husband, he turned to me and said, “Well, why don’t you look for them?” And I felt silly, because this had not actually occurred to me.

I had never stopped to think where the odd socks were.

So I started to look around the house – down the side of the beds, behind the laundry basket, under the sofa. But, although I found a few, I eventually gave up. I was at a loss to where they had all got to. And this is where the story could have ended.

Except, I began to think about my piano pupils and how they often want to give up playing their exam pieces because they are too hard. This reminded me of a story I would tell them about Edison, the inventor of the commercial lightbulb and how he was having trouble finding the correct material to make the lightbulb work efficiently enough for mass distribution. I tell them how his team tried item after item, but after 20 attempts he gave up.

My pupils laugh and tell me that he wouldn’t have given up that quickly. So I say, OK, he tried 100 materials. They hesitate, and look unsure, and we go on. Until finally, I reveal that his team tried 6,000* materials until they found the best one. Their eyes open very wide, and suddenly giving up after a few attempts seems somewhat premature.

See also  Which adverts get your goat?

So with this story in mind, I began with a new sock premise. This time I began with the idea that the socks are definitely in the house, and if we X-ray the rooms, there they would be, under the sofa perhaps, or behind the washing basket, lurking, and I asked friends and family where they had found socks, and looked on the internet.

Then, when I began to look, they started to appear, stuffed between the bed and the wall, at the bottom of the toy box, even a bunch of them crammed in the back of our clothes drawers. Finally, my sock drawer began to reduce just a bit, and it felt really good. I could now wear some of my favourite socks again, and I wouldn’t have to wear Christmas socks in the summer any more.

So, now when I sit on the sofa with my comfy pair on, reminiscing about odd socks being pulled from the corners of the house. My mind drifts to all the other things that still lie unfinished: the hand washing, the piano scores, the articles for Henpicked…

…and I sip my cup of tea and smile.