Home / Menopause / When will the menopause end?

The average age for a woman to reach menopause is 51 – although this can be earlier, either naturally or due to surgery or illness, or later. And the time leading up to this is known as perimenopause, which can start years earlier, and is when some women can notice symptoms. 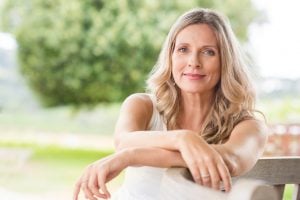 Technically, you are classed as being post menopausal the day after you’ve had 12 months without a period – but really what women are asking me here is when their symptoms will stop.

How long can menopausal symptoms last for?

Some of the most troublesome menopausal symptoms women experience in midlife are hot flushes and night sweats (associated with poor sleep and negative mood) which are often referred to by clinicians as ‘vasomotor symptoms’.

If these occur for more than six days over a two-week period, they are thought of as ‘frequent vasomotor symptoms’. We now know that vasomotor symptoms are a marker for heart disease and osteoporosis, and are also linked to an increased risk of high blood pressure, abnormal cholesterol levels, weight gain and an increased risk of developing diabetes.

The NICE 2015 menopause guidelines state that 75% of post-menopausal women experience vasomotor symptoms and these symptoms last on average seven years. The evidence for this is based on the SWAN study (Study of Women’s Health Across the Nation) in the USA, which analysed 1449 women with frequent vasomotor symptoms from 1993 -2013)

In essence, women who experience frequent vasomotor symptoms early on in their perimenopause journey or even before this stage should expect to have the longest duration of total vasomotor symptoms of around 11.8 years and lasting after their final menstrual period 9.4 years.

Conversely women who only experience their first frequent vasomotor symptoms after their final menstrual period should expect the shortest duration of symptoms at 3.4 years.

Why do some women experience symptoms for longer?

There are a number of reasons some women are younger at the start of their vasomotor symptoms. These risk factors include smoking, being overweight, anxiety or depressive symptoms, lack of social support and, for some women, a heightened sensitivity to bodily sensations.

Of course, statistics don’t and can’t take into account every individual woman’s personal menopause journey, and it’s important to think about each woman’s short and long-term risks during their menopause transition.

Is there a limit to how long I can take HRT for?

From a personal perspective,I have a few patients in their 80s and 90s that still experience troublesome vasomotor symptoms which they would describe as moderate or severe and are still taking hormone replacement therapy (HRT) to manage these symptoms effectively. It’s important for women to realise there is no cut off or particular duration they can stay on HRT for.

How do I know if my symptoms have stopped if I’m on HRT?

If there is a recurrence of symptoms experienced it is then straightforward to return to your previous dose and continue and review things again in 12 months. If there are no symptoms then after three months you could then consider reducing the dose further and if you still don’t have any symptoms you may choose to eventually stop.

There are a number of factors which contribute to answering the question: ‘When does menopause end?’ Every woman is unique and will experience her menopause differently – so if you have any worries or doubts, please speak to your GP.