When did you get your first bra? 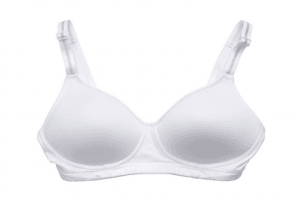 Back at school when we were all growing up at different rates, we had to wait for our mothers to decide if we were “big enough for a bra”. There we were, desperate to grow up, to be allowed tights instead of socks, to wear lip gloss and shiny green eye shadow.

Marks & Spencer was the only shop which stocked bras small enough. Most of them were plain white nylon and elastic things, and if you were really lucky your mother would allow you the ones with pink and blue or yellow and orange flowers. Basically, flat triangles that covered breasts so small my gran called them “bee stings”.

All would be revealed in the cruel nakedness of the sports changing rooms.

The sharp-eyed bully girls would point out the new ones to join the ranks of the recently supported.

“You’ve got a bra on, you didn’t have one last week!” Cringe.

Our PE teachers would stalk us in the changing rooms and sidle up to girls who’d started to bounce uncomfortably around the netball court.

”Tell your mother to get you a bra,” they’d whisper, then spin round and shout, “Get in the showers, Julie!” to someone who thought she’d evaded them.

The woman next door was evil. Her 14 year old daughter was forced bra-less into children’s stripy T-shirts, and she must have been a 36C. My mother was one of the kindly ones; we went bra shopping the moment I fitted into the second smallest size M&S stocked.