Do you ever feel as though your internal monologue is driving you mad? Many of us spend far too long rehashing a scenario, wishing we’d played things differently. 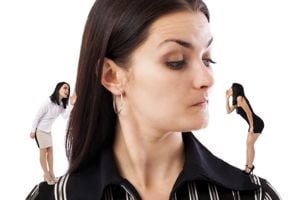 Having been an astrologer for many years, I’ve learned the value of using it as form of release for this inner conversation.

One of the most fun yet powerful experiences I’ve ever had was something called Astrodrama, which is based on the psychotherapy technique of Psychodrama.

In Psychodrama, you find a situation in your past and other people act out the conversation from your head – what you said, what you wanted to say etc. It’s like watching it all from outside and can be very cathartic.

Astrodrama is a little more lighthearted, but it can be just as releasing. Working in a group, you discuss the relative expressions of both the planets and the signs and then look at the charts.

You choose the astrological pattern in your chart that you’d like to deal with. This refers to the connections between planets. These can either be harmonious or challenging – Astrodrama tends to deal with the more challenging aspects because they are the most fun and enlightening. You then pick a situation, either real or imagined, to focus on.

The other members of the group volunteer to have a conversation as the planets, talking in a way that is suggested by the sign that they are in and with the attitude suggested by the aspect.

As people warm to the techniques and get into their stride, you start to hear your internal conversation becoming manifest.

See also  Great daily motivation hacks to get you going

After about five minutes, the group has a short discussion, sharing any lessons learned and then move on to the next person.

I wanted to share this technique because it brings me to two of the most enlightening planets in the chart, the Sun and Moon.

They are not called the ‘Luminaries’ for nothing and are usually the ones that have the most powerful effect on our internal conversation.

Everyone who is vaguely interested in astrology will know what sign their Sun is in, because our timing is based on the path of the Sun.

For example, everyone with their birthday on 8th March will have their Sun placed around 17 degrees Pisces – same as me – whatever year they were born.

The Moon, however, is a different matter. It moves through the whole of the Zodiac in four weeks, and therefore changes sign every two and a half days. You’ll need the year, and possibly the time, to find out the sign it is in on any given day.

There are plenty of calculators on the internet if you are interested in finding out your moon sign.

The Sun in our chart is the essence of who we are, and when we are allowed to express these energies, we can become the best of our sun sign.

When we are blocked by other people from being who we think we are, then we end up as the worst of the sun sign.

Expressing the best of ourselves gives us confidence and energy, and begins the process of self knowledge.

The Moon in the chart shows us how we were brought up, how we were made to feel and the habits we formed in early life.

This is why it signifies who we think we ought to be. In some cases, when the Sun and Moon are in a good relationship to each other, or even just in complimentary signs, it can reinforce our self knowledge and confidence by saying that we are pretty much right about ourselves.

We have the confidence to try and succeed and, if we don’t, then the courage to try it another way.

This is a double-edged sword, because we can be so pleased with ourselves that we become convinced that our problems are due to someone else.

However, if the Luminaries are in a difficult relationship, it is a constant wagging finger telling us we ‘should be more like…’

This instils guilt and a tendency to continuous self criticism. Again, there are two sides to this because although it can be a challenge to our self confidence, it also makes us continually review and refine our existence and where the responsibility lies.

This is ultimately empowering because we come to realise that the accountability for our lives lies in our hands.

The bottom line is to keep the conversation between the Sun and the Moon going and learn from it. It is really empowering to realise that, a lot of the time, how we deal with things and react to others and the world at large has an awful lot to do with our own inner monologue.

It is one way to help us recognise who we are, where we are going and how we can get there in the best way possible.

We don’t need to silence that inner voice – but we do need to try to understand it.