The menopause can weigh heavily on our minds. Middle age spread is the biggest concern for those going through the menopause. 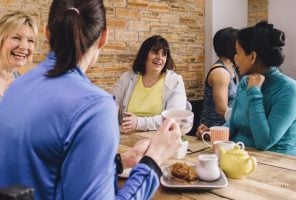 On World Menopause Day, a new study reveals women’s worries during the menopause.

The in the survey commissioned by Dr Morton’s – the medical helpline, Henpicked.net and Menopause in the Workplace almost 500 women between the ages of 40 and 70 told us the most and least worrisome health conditions attributed to the menopause.

Dr Karen Morton, gynaecologist and obstetrician and founder of Dr Morton’s explains: “We wanted to find out what worried women in Britain at the menopausal age. The results of this survey show a wide variety of fears and health concerns that they face. It also allows us to understand what the priorities are for women of a certain age.”

Dr Morton’s classifies the menopause as being when a woman hasn’t had a period for 12 consecutive months. The survey invited women to assess a wide range of possible menopausal symptoms and rate them for impact on their lives with a score of 1-5, with 5 being very severe.

Almost half of those surveyed, some 44 per cent, stated that gaining weight during the menopause is one of their biggest worries and rated it as a top concern. The dreaded middle-age spread being exacerbated by the menopause was most feared by women in the 40-50 age bracket. Only 10 per cent stated that piling on the pounds was a small concern. Dr Morton explains: “Central adiposity or middle-aged spread as it is commonly known is a physiological reality, and women hate it. It is essential that women address this through diet and exercise, but HRT can certainly help’.

READ  Exercise your way through menopause

42 per cent dreaded the lack of sleep which the menopause brings and 38 per cent bemoaned the hot flushes and sweats.

State of mental health also plays on the mind during the menopause with anxiety (32 per cent), loss of confidence (31 per cent) and poor concentration and forgetfulness (28 per cent) all listed as major concerns.

At the other end of the scale, dry skin is rarely a source of concern with just 9 per cent feeling that it is a big worry. Interestingly (for the aesthetics industry) only 17 per cent of women feel that wrinkles or droopy eyes are a top-rated issue.

Women were asked about ‘Worrying about feeling they should have sex with their partners and not wanting to’ and this ranked as a very low priority when the menopause arrives with 1 in 3 respondents citing that it is the least of their worries.

Dr Karen Morton often says that women are real “putter uppers” with so many health issues. She hopes that the 20 per cent of women who said that leakage and frequent trips to the bathroom are a very severe worry will seek help and advice about this, and not just ‘put up’ with it.

The ‘menopausal age’ also brought out some interesting results

Of the women surveyed, those who had borne children had experienced menopause significantly earlier than those who had not. Of the nulliparous (no children) women, 86 per cent were still menstruating after the average age of menopause of 51 years. This compared with only 30 per cent of women who had children.

READ  Cognitive Behaviour Therapy (CBT): how it can help with menopause

Some of the most telling images of distress were told in the free text box at the end of the survey. These included:

‘Grieving over no longer being able to have children’; ‘turning away from society because you dislike yourself so much you can’t look in the mirror any more’; ‘not buying new clothes for a year because you don’t want to admit your size is’ to mention a few.

Karen Morton summarised the survey: “If feeling too hot was the only issue which was stopping women from performing at work and at home then life would be simple. Unfortunately, as this survey shows us, there is an entire range of health worries women encounter at this time. We at Dr Morton’s will be working with Menopause in the Workplace with the aim of bringing about positive change. Our survey results will be used to help women get on with their lives and will provide information for employers to better understand the menopause.”

Deborah Garlick, of Henpicked.net and Menopause in the Workplace added: “Nearly 80 per cent of women of menopausal age are in work yet most women are not willing to discussing menopausal symptoms with their line managers.

“It’s time to talk about menopause openly as it is not just an issue for women. We all should be aware of it to enable us to support colleagues, friends and family members affected by it.

“We already work with the police force and the University of Leicester as well as companies such as Eon and Severn Trent Water to raise awareness. Our second annual conference in January 2018 in Nottingham will be a clear demonstration of the organisations which are taking menopause in the workplace seriously.”

READ  Long-term health and menopause: what you need to know

The survey commissioned by Dr Morton’s – the medical helpline and Menopause in the Workplace asked 458 women aged 40 to 70 what their biggest menopause concerns were. The survey was carried out during the first two weeks of October 2017.