Alright, now we’re in our fifties, there’s a lot we’ve learned and can pass on to women in their twenties and thirties – they’re going to be fifty one day, after all. 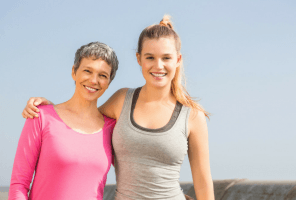 It’s a fact; women in their fifties tend to have more broken bones than those in their twenties and thirties. But the risk of deteriorating bone health and developing medical conditions such as osteoporosis can be significantly reduced by maintaining a healthy calcium enriched diet.

Calcium is our bones’ best friend, and women really need to have enough of it throughout their life so that they don’t have trouble when they grow older and their bones gradually grow weaker.

Darling, are those pointy heels really all that comfortable?

By that time the back pain would have become more of a chronic issue instead of something just temporary, and your feet crippled, and ugly – not even a pedicure can salvage the damage. Not saying ditch the heels altogether, just keep them for those special occasions.

Don’t try too hard to fit into that dress

Even though the series is way under the dust now, our favourite ladies in their 30s from SATC sure have left behind a style that everybody wants to follow. But the reality is that body-shapers such as the bodycon, corsets and even skinny pants to an extent are more of a fashion horror rather than the perfect fix to get the perfect fit.

Well, it’s not that we know of anybody who actually has gone crazy, but ultra-tight clothes are known for causing severe neurological damage upon continuous use. Not to mention, they also leave marks on your body making taking off your clothes in front of someone an embarrassment. And you thought wrinkles and sagging skin was bad, huh?

Beauty is only skin deep

Alright, here’s a confession; even women in their fifties want to look at least 15 years younger, and they’ll pretty much go to any extent to do just that by trying and testing a plethora of beauty products.  But dumping a thick layer of makeup on before they take on the streets is nothing less than a facial-of-disaster for your skin in later years.

Continuous use of cosmetics containing lead and hair removal creams not only lead to a number of skin allergies and irritations, but are also responsible for triggering skin cancer years down the road. They also make you age faster both by making you more dependent on makeup and, as a side effect, of the chemicals as well.

You’re better off working on your inner beauty so that it radiates outwards rather than creating a fake persona for the world to admire!

Young women like to flaunt their skin for all the right reasons, and also because they’ve got the smooth skin to do it. But if you’re going to go sleeveless too often, or spend an unusually high number of hours under the sun basking in its radiance, then by the time you’re fifty, you won’t be able to flaunt your skin as confidently.

It’s always good to be safe in the outdoors. Use sunscreens at all times, and opt for clothing that covers most of your skin while you can; that way you’ll help keep your skin young and beautiful when in your fifties.