Home / Menopause / What happens to your hormones during menopause?

Our hormones play a big part in our menopause transition. 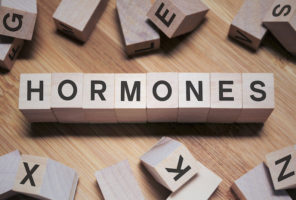 All women go through menopause, but many don’t really think about until it comes along. The idea that our reproductive life is ending is devastating for some, but a relief for others. Whichever side of the fence you’re on, for many women menopause can bring a host of symptoms or changes they hadn’t been expecting.

What is the menopause?

Simply, the menopause is when the ovaries no longer respond to the hormonal messages sent from the pituitary gland in the brain. Eventually, this leads to the end of ovulation and the menstrual cycle.

During the build-up to the menopause, known as perimenopause, our hormones go through a transformation process. Their levels fluctuate and can alter our physical, mental and emotional wellbeing. “I’m feeling hormonal” can sometimes be bandied about to describe how we feel at a given moment in time, but that feeling can soon become a reality for many women entering the menopausal transition.

What hormones are involved in the menopause?

There are a plethora of hormones at play in the menopause, all of which have a significant role in bringing about changes. The main hormones are oestrogen, progesterone and testosterone, but others such as follicle-stimulating hormone (FSH) and luteinising hormone (LH) also play a part.

There are three main types of oestrogen produced by the body, but oestradiol is the most potent and has many roles in the female reproductive system. During the normal menstrual cycle, oestradiol production enables the development and release of an egg, a process known as ovulation.

What does oestrogen do?

Oestrogen during the menopause

Oestrogen is also responsible for many of the female sex characteristics which develop during puberty. As women age, their egg supply reduces and the ability to conceive a child diminishes. As a result, during the perimenopause, oestrogen levels decline, a process which can take several years. However, when the monthly menstrual cycle ends completely, a woman will no longer have periods can no longer become pregnant. Ultimately, the body stops producing oestrogen altogether.

Many women notice changes to their cycle in their mid-30s. During the normal cycle, the levels of oestrogen and progesterone are in balance with each other. However, around this age, progesterone levels begin to fall and are subsequently out of balance with oestrogen.

Plus, the ovaries begin to produce more oestrogen because they become less sensitive to the hormone which stimulates follicles to produce it, follicle-stimulating hormone (FSH). As a result, you may ovulate sooner, which shortens the time between the release of an egg and your next period. You may also notice your periods are heavier and possibly less predictable.

The sharp decline in oestrogen known for causing the symptoms associated with the menopause like hot flushes, vaginal dryness and memory issues, occurs towards the end of the perimenopause. Here, periods may be lighter and occur less frequently.

The decline in oestrogen is responsible for many menopausal symptoms, such as hot flushes, mood changes and vaginal dryness.

“Bone health in women is very much dependent on oestrogen. Therefore, declining levels will cause deterioration in bone health,” says Dr Nicky Keay.

“Keeping physically active and loading the skeleton will help. For example, try dancing, walking and strength work. Look at the Royal Osteoporosis Society website where there is a very helpful article “Strong, Steady, Straight” to combat osteoporosis with exercise”, she adds.

In the five to seven years following the menopause, women can lose up to one-fifth of their bone density due to the falling levels of oestrogen.

What does progesterone do?

Progesterone during the menopause

During the normal menstrual cycle, progesterone works in an opposite manner to oestrogen to keep both hormones finely balance. Oestrogen rises in the first phase of the menstrual cycle to promote the development of an egg, while in the next phase progesterone takes over preparing the body for pregnancy or until the period occurs. However, the perimenopause causes levels of oestrogen and progesterone to fluctuate, so the cycle is less predictable and can cause troublesome symptoms.

Dr Keay adds: “Female hormones are not just about oestrogen. The ratio of oestrogen to progesterone varies during the menstrual cycle. So, the decrease in both hormones during peri and post menopause will result in physiological changes.”

For some women, perimenopause can feel like almost extended premenstrual syndrome (PMS). For example, symptoms like feeling irritable can seem to last a lot longer. These symptoms are caused by the declining levels of progesterone, which can no longer keep oestrogen levels in check, causing oestrogen to become dominant before it, too, declines.

What does testosterone do?

Testosterone during the menopause

Testosterone is not just for men – it is another important female sex hormone. Healthy young women can produce up to 400 micrograms per day, that’s around three to four times the amount of oestrogen the ovaries produce. However, women only produce around a tenth of the hormone compared to men.

In women, the ovaries and the adrenal glands produce testosterone. It helps to regulate our mood, cognitive function and sex drive.

Unlike progesterone or oestrogen levels which drop dramatically at the time of the menopause, testosterone levels decline slowly as women age. In fact, levels decrease by half between the age of 20 and 40. Because testosterone plays a key role in a woman’s sexual desire, as it falls a woman may notice her sex drive reduces. Testosterone also has an impact on bone health and as that and the levels of oestrogen levels fall during the menopause, women are more at risk of developing conditions like osteoporosis.

READ  Breast cancer and the menopause: a double challenge

“Low levels of the male hormone testosterone are produced in women. So, a decrease in production post menopause combines with the effects of low levels of female sex steroid hormones,” says Dr Keay.

Therefore, it’s not unusual to experience changes in mood and libido. However, testosterone levels decline as women age, and this is not solely menopause related.

What can be done about the decline in hormones?

“Empowering yourself with information about yourself is key. This especially applies to menopause. In the first instance knowing that you are not feeling 100% is due to your changing hormones, gives you understanding. In turn, this provides an opportunity to consider your options. These options can range from changes in lifestyle such as increasing exercise to protect bone health, paying extra attention to nutrition and considering pros and cons of HRT,” says Dr Keay.

She adds, “Despite recent reports, HRT is safe in those who are not contraindicated. Although there is a slight increase in the risk of breast cancer, it is nowhere near as high as the risk associated with suboptimal lifestyle factors such as being overweight, smoking and drinking excessive alcohol. As with any medication risk/benefits must be weighed up for the individual. For many HRT improves quality of life.”

If you’d like to find out what your hormone levels are, you can take a simple home blood test and send direct to a lab for analysis.  For more information on home blood testing visit Forth Life.

Forth menopause test kits. Samples taken at home for laboratory analysis. Download the FREE app to monitor your results.