Home / Work and money / What do top women leaders have in common?

There is no denying that the world still struggles to remove gender disparity in almost every area of society. For women, this discrimination can be much more pronounced when they enter the mainstream corporate and political worlds. 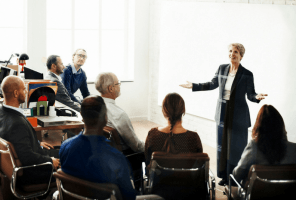 There are, however, many strong and brave women who have been able to topple over pre-conceived gender roles and outshine everyone around them.

There is no one recipe to becoming a successful, independent woman, but one can always look up to great leaders and find so much inspiration. Each one may be unique and charismatic in their own way, but there are also many traits that they have in common.

A woman’s words can woo even the most stone cold of hearts if she only knows how to do it. Influential women are known to be persuasive, and it’s essential that they have self-belief and confidence in their ideas and ideals.

Women are often associated with key traits such as empathy and the ability to read people, are able to persuade and build trust quickly than those who suppress or fail to demonstrate these qualities.

90% of good leadership relies on communication – and it’s visibly well evolved and utilised by the most influential women.

They believe in goal setting

Success doesn’t happen by accident. It’s the fruit of intense hard work, perseverance and, above all, solid planning and goal setting. All strong female leaders are superb goal setters. They demonstrate an unbreakable discipline and focus on every aspect that is valuable to them including their personal lives and other responsibilities.

READ  Is the telephone still a trusted sales tool?

To have a strong, decisive character, one needs to be at peace in all areas of their life. These women don’t get side-tracked because they are creative and innovative thinkers who build successful daily routines and a work-life balance without having to compromise on either.

This laser-like concentration span only adds to their charm and makes these inspirational leaders appear more composed and confident when they are surrounded by team members or co-workers.

Contrary to the infamous belief that women will always hate other women, top female leaders strive to build teams and communities, and healthy personal relationships.

Successful women leaders are top arbitrators. They detect internal conflicts and take action to resolve them, keeping the team’s unity safe from discord.

In addition to this, these leaders solve problems with a team-centred approach. They tackle everything that comes at them and their team by being open to ideas, taking immediate, effective action and making timely and informed decisions.

Successful thinkers and leaders have an iron foundation of principles and self esteem. Tenacious while also being compassionate, fierce and driven in their beliefs, not embarrassed or uncertain of their identity, they don’t apologise for being themselves.

All women face similar challenges. However, what sets some women apart is how they respond. They are almost always able to turn the odds in their favour and keep a well-defined self identity.

All great women tackle barriers head-on with grace and confidence and never lose their poise. They never second guess themselves and always stand by their convictions and decisions.

READ  Getting girls switched on to science

They are not afraid to break the rules (and prejudices)

Laws have never been in favour of the growth of women. Women have always had to fight for their identity and credibility, with examples throughout history bearing the judgmental stares that society heaved upon them.

The famous female author, Charlotte Bronte, was forced to ghostwrite her own books so that the society wouldn’t be offended. Well-known actress Marilyn Monroe, who is now celebrated as the legendary queen of Hollywood, suffered objectification and shaming for not being the typical ‘home-making’ woman of the 1940s.

Rosa Parks, Amelia Earhart, Amy Johnson and so many more famous women became great because they refused to blindly follow what they were told to do. Remember, empowered women fight the system to move forward and are not afraid to speak their minds or think outside the box. They question what’s wrong and strive to eradicate the status quo.

If you want to be a leader, have the confidence to question unfair procedures and corporate/political structures. Strong women execute out-of-the-box concepts and solutions to tackle issues around them. They are not afraid to take on the unfamiliar or walk on roads less travelled.

That being said, one needs to keep in mind that to go ‘against’ the flow, you first need to learn how hard the current is. Successful and strong women never act on a limb nor believe in spontaneity or impulse.

They don’t believe the myths that are etched by hundreds of years of societal brainwash. Every action, decision, and direction taken by great women is calculated and helps them move closer to success.