Home / Time off / Interests / Wassailing: what exactly is it?

How are you feeling? Are all your New Year’s resolutions starting well, or has the damp and drear started to kick in? 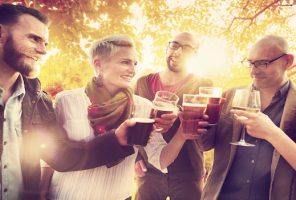 In the past, what is now January was a lot more jolly, with some fun traditions that helped cheer people through the darkest month.

One that we like to do at Windmill Community Gardens in Nottingham is wassailing. This can mean just singing carols, but nowadays it mainly means celebrating fruit trees.

The word ‘wassail’ is a hint that this tradition came before Christianity, coming from the Old Norse or Anglo-Saxon for ‘good health’, though a lot of what we do today mimics what we know about from medieval writings.

Wassail also gave its name to a drink that would have been passed around in a communal bowl in those pre-health and safety days, made of cider or mulled ale with curdled cream, roasted apples, eggs, cloves, ginger, nutmeg and sugar.

Wassailing in orchards used to be concentrated in the fruit-growing areas of South West England, but is now being embraced all over the place. The traditional time to go wassailing was on Twelfth Night, but those of us carrying on the practice like to observe it on 17 January, sometimes known as old Twelfth Night*. This is so we can enjoy the last gasps of the winter festival as late as possible.

Everyone wassails fruit trees in their own way, so there are loads of different ceremonies, songs and rhymes that go with them.

Most though, involve going around orchards in procession. There is often a master of ceremonies (sometimes called the King) who leads wassailers and pours cider on the roots of the tree and a Queen or small child who gets hoisted up into the branches of the trees to place cider-soaked toast in them. This is actually a clever idea, as it attracts birds who will then check the trees for tasty pests.

See also  World Fair Trade Day. Will you be 'an agent for change'?

Some places go all out with costumes and Morris dancers, others are more low key, but all seem to use a song or rhyme like this one:

‘Wassaile the trees, that they may beare

You many a Plum and many a Peare:

For more or lesse fruits they will bring,

As you do give them Wassailing.’

Everyone then makes lots of noise, often banging pots and pans, to wake up the trees ready for spring. In some places, they even use guns to fire volleys into the trees – hopefully after the Queen is helped down!

Everyone has a great time, frequently aided by apple-based food and drink.

There are likely to be wassailing events all over the UK in the next few weeks, so keep an eye out in your local paper, or look for notices around orchards and National Trust properties in your area.

*Note for us nerds: This came about because the old system of reckoning leap years went astray. Dates were falling later and later in each season and Pope Gregory fixed it by cutting out a bit of October and reorganising. Those who didn’t approve like to use it as an excuse to observe Christmas and Twelfth Night a few weeks later.

If you fancy joining us at Windmill Community Gardens on Sunday 18 January from 2pm you are most welcome to be part of our wassailing (though we aren’t entirely traditional, mixing it with elements of the Punjabi festival of Lohri which falls around the same time).