Home / Time off / Wartime memories: growing up in German-occupied France

Meeting Suzanne* recently was a special moment for me, as she shared with me some fascinating stories about her memories of the Second World War, when she was just a young child. I was so moved to hear these reminiscences, and felt as if I was being told something that one would normally only see on television or at the cinema. 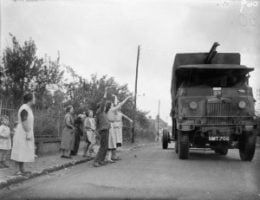 The Second World War is a part of history that many French people do not want to discuss, which came as quite a surprise to me. For a start, I didn’t realize how much the French militia informed on their own people to the Germans. This is something which caused great divisions at the time – both in individual families and throughout the nation.

There were many who believed that the French government’s negotiations with the Germans over the division of the country were a good thing. France was a free zone until 1940, when it was divided into two, with Germans occupying the more northern part of the country and the president, Marshal Philippe Pétain, residing within the free zone at Vichy. It remained like this until 1943, at which point Germany occupied the whole country.

The Dordogne region where Suzanne grew up was in this free zone. Her father was headmaster of the local boys’ school, and her mother taught the primary schoolchildren. Many families at the time were moving from northern France to avoid the fighting, with some settling in her village. Suzanne recalls that some poor children had to sleep on cardboard due to the lack of bedding, although villagers did all they could to help. One three-year-old boy was living with his grandmother because, tragically, he had been orphaned during the course of the long journey south.

When Suzanne was about eight years old she became friends with another girl whose mother was English and father French-Jewish. They were firm friends from 1937 to 1942. The father was sent to a work camp by the French militia and he wrote to Suzanne’s family for a year, to give news, but then the letters ceased. In 1942 his daughter and wife were also sent to a work camp; they managed to send Suzanne two postcards and then nothing more was heard of them. Suzanne tried repeatedly to find them after the end of the war, but sadly to no avail; their fate remains unknown.

During the time of the free zone, Suzanne’s father was under strict instructions to fly the French flag every day and to have the schoolchildren sing ‘Maréchal nous voilà!’, which sung of the glory of Pétain, instead of the national anthem ‘La Marseillaise’. As an act of defiance, her father would whistle ‘La Marseillaise’ under his breath, but someone informed the militia and the then prime minister, Pierre Laval, wrote to him and suspended his salary for three months as punishment. Only with the help of grandparents who had a farm nearby did Suzanne’s family have enough to eat.

To slow down the German invasion, the French blew up bridges, including ones which Suzanne used to get to school. She would take the ferry or, if that wasn’t operating, would row across the river with her friends. Missing school was not an option.

Once the Dordogne came under German control, Suzanne has many memories of the occupation – including a vivid one of her mother having a gun held to her neck whilst German soldiers checked their lodgings for any hidden people. The Germans also requested the use of her piano for a church concert they were organizing for their soldiers. Her father didn’t believe they would return it, but in fact they did and one of the officers even played – beautifully, Suzanne told me, and retuned the piano as well.

Suzanne’s older sister went to Clermont-Ferrand to study at the university, as the nearest one to their home was Bordeaux, which was in the occupied zone at the time. She became a liaison agent for the Resistance and passed messages, always through other women, as they attracted less suspicion than men would have. For part of her resistance work she would go to the restaurants near the town hall in order to secretly listen in on militia conversations, which she could then relate back through her contacts to help protect those under suspicion.

One day in 1943 the Germans went into her university and ordered all students into the courtyard where they were told to kneel down and face the wall. Jewish names were read out and ordered onto a truck, driven to the Plateau of Gergovie, a large hill on the outskirts of the city, where they were shot, and buried on the spot. The Greek teacher had refused to leave the building to go into the courtyard, so they simply shot him dead where he stood.

Back in the Dordogne, villagers in Suzanne’s village had been hiding weapons in the attic of the town hall, but they were finally discovered by the French militia, who rounded up about forty local men, including Suzanne’s father. Two German officers were present and they demanded all identity papers. Her father had an invalid card, as he had fought and been injured in the First World War. When they saw this, he was put to one side, but all the other men were taken to the local cemetery and shot. Her father had been saved because they respected his service during the previous war. All the while, Suzanne and her mother were witnesses to the event, as they looked out from an upstairs window.

Towards the end of the war, Suzanne’s mother and sister would sew US and Union Jack flags, as they felt optimistic that the end was near. On D-Day, she was in school, in an English lesson at 8am, and the teacher told them to stand up and go home to tell their families that ‘They’ve landed.’ They then stood for a minute’s silence as a mark of happiness that the war was nearly over.

After the war, Suzanne’s family could finally visit their seaside resort home, which had been under occupancy throughout the war and been used as an infirmary. Her father discovered the corpses of three German soldiers in his garden. Only two of the three were identifiable by their badges. They were probably buried there because there had been no time to bury them elsewhere. They were moved to the paupers’ grave to allow them some dignity, even in death.

When I talked to Suzanne, she was emphatic that we need Europe and the French/German friendship, so that the atrocities which occurred during the war never have the chance to happen again.

Whilst that may be the case for these two countries, it doesn’t seem to stop atrocities happening in other parts of the world, something sad but true.

*Suzanne is not her real name as she wishes to remain anonymous.