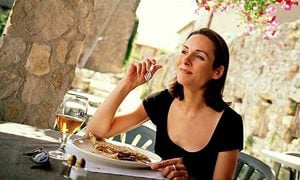 On a recent trip to Madrid I noticed, as I do on every trip to warmer climes in Western Europe, the number of women aged 50 plus who are out and about and enjoying life on the streets of their cities. This was no scientific survey, just an observation made from my favourite position at various pavement cafes and restaurants.

I suppose my interest stems from being in their age group. I know that women outlive men but I was struck by the number of older women who take part in outdoor life, whether with family or groups of female friends, in twosomes, or even alone, and how relaxed and confident they look as they go about their pursuits. It was fairly common to see a lone woman shopping for clothes or shoes at 10pm and then selecting an outdoor table for a meal and glass of wine (or two). They don’t necessarily look any happier than their UK counterparts, or particularly any fitter or healthier – their generation was not the one to worship in the local gym – but they do look as if they know that they belong. They are out, seeing and being seen, and they appear to be confident that they have the same right as everybody else to be taking part.

All of this got me to thinking that back in the UK a lot of females reach a certain age and seem to relinquish their right to the streets, particularly after a certain hour in the evening. Why?

Why do some women I know say they haven’t the nerve to go and have lunch on their own? Or would never dream of going to the cinema alone? Or getting into a taxi alone? Why do so few women over a certain age ever use evening or late night public transport, even in pairs? They will only venture out with the protection of their car around them; isolated but feeling safer than amongst people. Sure, on any given day, in any UK city, you will see lots of women of working age going about their business. They are happy to lunch solo, late-night shop, and travel from work alone to meet friends. When do we lose that confidence? Does it start to ebb away with the empty nest? And do our overseas neighbours have a stronger sense of family inclusion?

In some cases our desire for homeownership in the UK could play a part in reducing communal life. On cold winter evenings the door is closed and in some people’s homes no further social interaction takes place until the next morning. Most of Western Europe has a tendency to rent and this surely makes for more social awareness and possible friendships.

Of course our weather doesn’t help. In fact it is a big factor. Especially summer 2012! The lack of warm, balmy, evenings doesn’t encourage outdoor pursuits, sitting in leafy squares with local friends and neighbours and engaging with people of all generations. The likelihood of perceiving young people as ‘hoodies’ or yobs must blur a little when you see them growing up and know them as someone’s relative. And, likewise, the young will not think of the older generation as weird if they are familiar and are known as someone’s parent or grandparent. The various generations would come to see the streets and outdoor life as the right of all.

Back in the UK women of 40 plus have relinquished their right to the streets by sheer lack of visibility. A recent Radio 4 Woman’s Hour programme had a topic asking ‘Does the thought of entering a restaurant and uttering the words “table for one” fill you with dread?’ Apparently most women are uncomfortable in such a situation and professional women travelling on business feel eating alone is the most difficult part – they would rather settle for room-service than commit this social faux pas. Men have no problem with the same situation and will confidently order a drink at the bar and request a table for one. I have to admit that I have never dined alone in a restaurant in the evening. I have cheerfully entered a restaurant alone and been seated, safe in the knowledge that my companions were arriving shortly. Is a lone woman viewed differently to a lone man? Or is that merely a woman’s perception in the UK?

All I know for sure is that our European sisters have no need to reclaim the streets; they never gave them up.