Want to Volunteer? Like those brilliant Olympic people? Here’s another fantastic, active and uplifting success story to be a part of 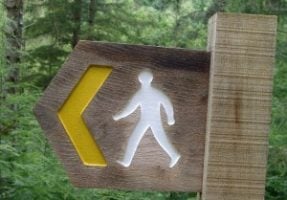 Ever since childhood and the long walks my father used to take us on when my mother was having afternoon rests after a much later baby, I have loved walking. In my life, it is the answer to practically every problem and recently I have understood much more my aunt’s saying: “I have two doctors; my right foot and my left foot.” I am not the only one to subscribe to that particular wisdom it seems.

In the mid-1990s an Oxfordshire GP, Dr William Bird MBE, had a typically large and growing group of patients with the following (also growing) problems; type 2 diabetes, high blood pressure, heart disease and mild depression. He suggested that they exercise as a way of lessening their symptoms and improving their quality of life. When they returned to the surgery again and again most of them admitted they had done no exercise since seeing the good doctor. First he despaired and then he took action.

Walking for health (and good company!)

He started leading walks locally for his patients and noticed that their physical symptoms were reduced and their general quality of and attitude to life improved as well. This was lots of gain for very little pain – and absolutely no cost. Almost miraculous! Walking for Health was born and is now a huge success story – but Volunteer Walk Leaders are desperately needed all over the country.

A friend who knows my passion for walking coerced me into going on a local training day and it was a revelation; the volunteers are as different-to-each-other a bunch as you could manage to find anywhere but have one thing in common: a desire to give something back to their community and a passion for walking and the great outdoors.

And only two out of about 40 people looked incredibly fit and very healthy; all the rest of us were of the bog standard body brigade! Your local council will almost certainly be involved on some level (and if they’re not, they should be) and volunteering can be done with whatever commitment you can personally make to it.

So there are volunteers, retired from their jobs, who lead walks three times a week and others who, like me, only lead a walk once a month or every six weeks. Obviously you can increase or decrease any commitment you make as time available increases or decreases and clearly the walk is as good for the Volunteer Leaders as it is for the participants; win-win!

A hugely important part of Walking for Health is the social side. No walk is without a bonding cup of tea or a pint afterwards and in fact many participants, when they become too infirm to walk, carry on coming to the social occasions. They report a vastly more positive outlook on life with many friendships formed and a greatly improved social life. In fact for some this social group is the only one they are a part of, so it is incredibly important. Current research is underlining the importance of this; the old adage ‘a problem shared is a problem halved’ rings as true now as when it was coined.

Another hugely positive aspect of Walking for Health is that, unlike gym membership (often prescribed by GPs), which has a very high drop-out rate, the staying power of people who start Walking for Health is very strong – hardly anyone doesn’t come back again and again, and then of course they are a regular. Their fitness and happiness levels increase and they can’t imagine how they ever lived without it.

Research shows volunteering is good for the mind and body

The positives of Walking for Health don’t end there. We now know that volunteering is incredibly good for your health too. Volunteers have lower mortality rates, greater functional ability, and lower rates of depression later in life than those who do not volunteer. And the benefits grow with age – the older you are when you are volunteering, the greater the health benefits.

Released earlier this week,a study published in the Archives of Internal Medicine examined the patient data of 18,670 participants in the Cooper Center Longitudinal Study. This data was linked with the patients’ medical information in later life from the ages of 70 to 85. The study showed that when patients increased fitness levels in their middle age by 20%, they decreased their chances of developing chronic diseases – such as congestive heart failure, Alzheimer’s, and colon cancer – decades later by 20%.

Dr Jarett Berry, senior author of the study, said: “We’ve determined that being fit is not just delaying the inevitable, but it is actually lowering the onset of chronic disease in the final years of life.”

Meanwhile, another study whose results were recently presented to the European Society of Cardiology Congress, showed that healthy behaviours such as exercising regularly, keeping weight down, drinking in moderation and eating plenty of vegetables can cut the chances of developing high blood pressure by two thirds.

The study also showed that the impact of these measures on hypertension (high blood pressure) was much bigger than expected and in some cases could even be just as effective a way to treat sufferers as prescribing drugs.

Finally, in a study published recently, researchers reported that being active and living a healthy lifestyle into your seventies can make a big difference to your life expectancy.

Academics at Sweden’s Karolinska Institute analysed the lifestyles of 1,810 people over 75. The findings said that men with the healthiest lifestyles lived six years longer and women had five extra years. The study particularly identified that, of the leisure activities looked at, physical activity was most strongly associated with survival.

The report’s authors said: “Our results suggest that encouraging favourable lifestyle behaviours even at advanced ages may enhance life expectancy.” These findings add to the increasing body of evidence that demonstrates the vital importance of physical activity and the need for more support for those who are inactive to take up regular exercise, no matter what their age or abilities. Walking is easy, free and accessible to nearly everyone. It’s also an easy activity to start slowly and build up gradually, and is flexible enough to fit into today’s busy lifestyles.

Our Walking for Health schemes are already delivering the benefit of regular walking to over 75,000 participants around the country, but we want to continue to encourage those who do no, or very little, exercise to join our walks. Walking in a group provides not only the physical benefits of walking, but also offers the opportunity for social contact and support in getting active.

Current research gives people even more reasons to get walking and keep active and Walking for Health can offer them the perfect place to make a start!