Home / Making a difference / Featured blogs / When will schools learn?

OMG! OMG! OMG!  The photo below was snapped in one of my local secondary schools. In case you can’t read the small print, girls are being encouraged to work out whether their body shape is most like an apple, a pear, an hourglass or a rectangle. Thanks.

It’s exhausting just watching. It’s crucifying to live it. Teenage girls do not need to be encouraged to think about their bodies any more!

No! NO!! NO!!! At school, they need to find a safe space where for a short interlude in the day their appearance isn’t important.

It is of course difficult for schools to create such a space when the culture outside school makes it so clear that appearance does absolutely matter and if you don’t make the grade you will suffer rejection and humiliation.

But that doesn’t mean schools shouldn’t be trying. And trying much harder. After all, they make enough of us work at subjects we are rubbish at. The school that put this poster up deserves 0/10 and detention. Or a good old fashioned beating. And they should certainly “start reading around the subject a little more to deepen their understanding.”

Why is the plight of teenage girls so overlooked in schools? In how many schools do gender issues even feature in the school improvement plan?

For me the problem is that most senior managers in secondary schools are male and just don’t know what it is like to be female in a world which is still relatively new to the concept of gender equality and still judges women primarily on their appearance. 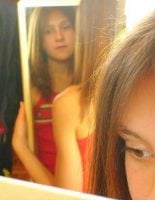 Grrrrr ….. If only the Secretary of State for Education, who happens to also be Minister for Women and Equalities (because let’s face it, those are both part-time jobs…) was living with a teenage daughter going through our state school system. Then change would happen. But Nicky Morgan has just one eight year old boy so she will have no idea how difficult life is for your average teenage girl.

So we mothers of teenage girls who see the daily struggle to measure up to the Kardashian fantasy need to step up and start throwing our toys, and demanding action. For the sake of our girls, and for the generations after. Shall I start by naming and shaming this school?