40 Years On: life for one of the Vietnamese Boat People.

When I met up with Le-Quyen to talk about her leaving her homeland, I realized it was the first time I had met and talked to someone who was known as a ‘boat person.’ I have to admit my knowledge of Vietnam’s history was pretty sketchy so she filled me in with the basic facts.

France left Vietnam in 1954 after failing to win the Vietminh war, which had run for eight years. They signed the Geneva accord together with the USA and the Vietnamese communists and it was decided to split the country in two. The communists were in the north and the republicans, of which two thirds were American, in the south.

In 1975 Vietnam became totally communist and her mother decided it was time to leave but Le-Quyen didn’t want to as it would have disrupted her exams. She was 19 at the time and somewhat naive in her thinking.

She hadn’t really given much thought to how she would manage, financially and emotionally, by herself. Although she had three siblings in the country, she didn’t live with them. Fortunately for her, her mother couldn’t get a flight out as so many others had had the same idea. Plan B meant knowing  someone with a boat whom they could pay in order to leave. Her mother knew a marine and it was decided they would stay with his brother until they got the go-ahead to sail.

On 30th April the city she was staying in – City Moon – was surrounded by soldiers. The house was attacked and they spent the night on the floor, avoiding bullets that shattered all the windows. In the morning they took a surrender flag, displayed it on their car and drove past the soldiers, who did nothing to prevent them leaving. Once they arrived at the beach, they discovered the marine had already left, so they paid a fisherman to take them further south. Their boat kept sinking because there were too many people on board, which meant having to change boats six times before they reached the Philippines. There they got on a US cargo ship which took them to the island of Guam – an American island in the Pacific Ocean. Whilst waiting to board this ship, all she could see at one point was a sea of boats – thousands of Vietnamese fleeing their country and US helicopters dropping parcels of food and medicines onto the ships. The journey to Guam took four days, during which she didn’t eat, drink or use the toilets, due to lack of privacy.

See also  What is domestic violence?

She recalls a baby dying during the trip and being thrown overboard as there was no other choice. 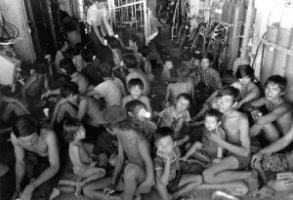 Once they reached Guam they spent five months in a refugee camp whilst paperwork was sorted out. They were told they would be sent to France as they had existing family there, otherwise it would have been America. The Red Cross paid for their flights to Paris and a year later she became a French citizen. A scholarship from the French government enabled her to study French for a year and later on, chemistry at university. After university, she went on the gain a PhD in Mineral Chemistry, met her husband and had two children.

I was really surprised when she told me the first time she went back to Vietnam was in 2006, over 30 years after leaving. She told me she couldn’t face it before then, as she was scared of how she would feel and how much the country had changed. Politics and government is not something you discuss in this country for fear of reprisals and the one sister who still lives there has given half her house to an official, who was placed in her home to listen to her conversations to verify if she is criticizing the regime.

As a result of living in France for so long, she doesn’t feel Vietnamese but nor does she feel French. But she enjoys celebrating customs from both cultures. Her motto is: when fate hands us a lemon, let’s try to make lemonade.

Here is a very positive lady. One who considers her greatest achievement to date as making a second life in France and having a family. She and her mum did what they had to do and managed to escape and re-build a life far, far away from what they had grown up with. For some Vietnamese boat people, life has gone on.