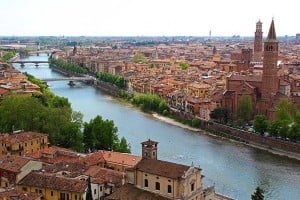 With a little help from airbnb Phyllida Barnes takes a much-needed, affordable break in the charming Italian city of Verona

Verbatim email below from Balazs, Hungarian/Italian owner of delightful flat in the middle of old Verona, rented by us through www.airbnb.co.uk :

[quote]think..dependly by the weather, of course I suggest you try to explore garda lake…nform please before get there..about weather …but if t’s good bvisit it…
suggest yu sirmione and malcesine amazing towns. Ok ok….check-out 9.30 is just perfect..thanks…arrange it with the guy diego tomorrow ok?
Sp it 1 king bed good gor you? Because I have a double bed room and a single beds room….[/quote]

And so began a delightful autumn adventure. George and I badly needed a break sans enfants . We could get to Verona for £60 (thanks to our BA airmiles) and there was an interesting, good value flat on airbnb (find out more below) which took little over an hour to find and book.

A flight cancellation cost us one whole afternoon of our 2.5 day holiday (mille grazie BA) but we eventually arrived in Verona at 11pm. We had exchanged texts and emails with our Budapest-based landlord who assured us that Diego would meet us in the centre of town, give us the keys and let us into our apartment.

There was a certain frisson attached to the uncertainty of it all, which was especially disconcerting for George, who doesn’t like things to be too exciting. I was taken back fondly to my interrailing days circa 1976 when every night was an adventure; train, pavement, park, hostel, beach or hotel?

All was well; the charming, beautiful, English-speaking Argentinian Diego leapt into our taxi and minutes later we were being shown into our slightly shabby but very charming and authentically Italian apartment.

We spent three nights and two full days based in Verona, exploring the really lovely old town and driving all round Lake Garda. We had two evening meals in the city; one cost €100 for two including wine and was one of the best meals we have ever eaten anywhere; the other cost €30 from one of the most spiritedly Italian and joyfully noisy restaurants we have ever eaten in!

The boutiques in Verona are fabulous and reassuringly full of top-end British tweed, wool, cashmere, suit fabric and men’s shoes. Some of the shops are works of art in themselves and we just longed to go and get George fitted for an Italian suit while I waited in a gilt chair and sipped an espresso or a prosecco…

We found a perfect bar with sofas for before and after-supper drinks, surrounded by voluble students, a large and endearing bar-dog and a collection of interesting people happily reading novels while sipping a glass of something delicious. People-watching: one of the best and cheapest sports on offer in the city.

Shamefully we didn’t see either Juliet’s house and balcony or Romeo’s house, and I did rather regret arriving the Monday after the very last Saturday of the world class Verona opera season. Operas are held in the Roman Arena which is the third largest in Italy and some of the world’s biggest opera names take part.

Our apartment cost €59 per night through airbnb.co.uk . Airbnb hosts are generally people who like people, want them to have a good time and will happily give good local advice to their guests. Using airbnb is a wonderful way of finding interesting accommodation to suit your budget, large or large or small, and works on the principle that every stay is reviewed publicly, so it is in the owner’s interest to make sure a good service is provided.

We loved the personal contact with our host and he answered all my questions with passion. Taking his advice was like having a trusted friend in the city; always my favourite way of travelling anywhere.small, and works on the principle that every stay is reviewed publicly, so it is in the owner’s interest to make sure a good service is provided.

1) Via Sottoriva which has an ancient covered walkway and some delightful shops and restaurants.

3) Piazza delle Erbe with its ancient marble slabs, tacky but cheerful market, buzzing bars and cafes and wonderful mixture of towering, often mediaeval, houses with balconies, many painted in bright colours and with cascading pots of flowers – heavenly.

4) You can walk straight from here through the Arco della Costa, an arch with a whale rib hanging from it.

5) Piazza dei Signori, a relatively small but fabulously atmospheric square surrounded by more mediaeval and beautiful buildings with the remains of colourful frescoes on their walls and a statue of Dante and other notable signori.

6) Adige River which, unusually for a river running through a largish city, is very wide but shallow, fast-flowing and clean. It makes it feel like a mountain stream.

7) Ponte Pietra where we watched a rather hunky man in a kayak training against the impressive current of the river below.

8) The Archaelogical Museum, which is really atmospheric and set on the side of a cliff in the former Convent of Saint Jerome just above the roman amphitheatre and river. There are fabulous marble roman heads and statues with faces you really want to have a conversation with, as well as fascinating Etruscan and Roman bronzes.

9) Even higher up is the Castel San Pietro with wonderful views.

10) You could spend a week just looking at Verona’s churches, almost all of them beautifully decorated and awe-inspiring in their magnificence. The Duomo or Cathedral of Verona is the largest and doesn’t disappoint on any level.

After over an hour’s drive we really wished we’d taken our swimming costumes as we sat on an idyllic pebble beach in warm sun and looked across the lake at the mountains, admiring the total clarity of the water and small fish swimming in shoals.

There are a few imposing and very old castles on the shore of the lake and a couple of these in the south sit almost side-by-side with theme parks. Even though this end of the lake is obviously touristy, there is still a fresh charm about it. Where the lake narrows the atmosphere changes and it feels peaceful, unspoilt and very affluent all at once, which is presumably why George Clooney has a house there.

Our landlord had recommended Sirmione and Malcesine so we headed to Malcesine on the north east side of the lake and had a wonderfully relaxing couple of hours exploring its tiny passageways, small shops and spectacular views. We also enjoyed a delicious cheesecake and hot chocolate

Part of the lake has been Austrian in the past and the border is close, so menus tend to be in German as well as Italian. We left Malcesine reluctantly to drive down the west side of the lake and through the incredible tunnels (you may recognise them from a recent Bond film) that take you right along the coast and back towards Sirmione which, sadly, we had run out of time to explore.

There are plenty of flights to Verona from all over the UK. It’s worth shopping around for a good deal, of which there are plenty, time-of-year permitting.

For a really romantic and slightly longer holiday, you could always take the train from St Pancras. It goes via Paris and takes approximately 16 hours. It is, however, shamefully expensive compared with a cheap flight.