Home / Happiness / Wellbeing / Loneliness / University: cowering on the edge of the nest

A daughter’s perspective on leaving home to go to university… 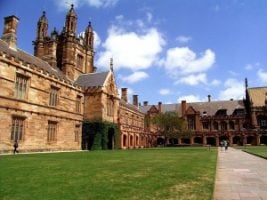 As I recall, going to university wasn’t so much ‘flying the nest’ as it was falling, flapping and whacking into great big branches.

If I was going to be torn away from my comfy home, my contented, quiet life in suburban London, reliable friends and a nurturing mother, university (whatever that meant) would have to be pretty enticing. It would need to be: a campus, with a fence around it, academically high achieving, very green, with at least one tree under which I could envisage myself sitting and revising…the somewhat ridiculous list went on. Standards were sky-high, expectations were low and morale even lower.

Begrudgingly, two universities were considered and open days attended. The first boasted a beautiful campus with fields, a giant lake, woods and lots of inviting looking trees. There would be brand new halls of residence (double beds and en-suites in self-catered flats of eight to ten people) and the course became the only thing I could see myself doing.

The second establishment was cold, wet, far from home and in the middle of a city. There was no safe enveloping fence and sitting under a lamp-post to revise just wasn’t going to fit the bill. The course, a four year MSc programme, was a singular tick in a singular box but I hated the rest with a passion. Besides, my heart had already been won by another. 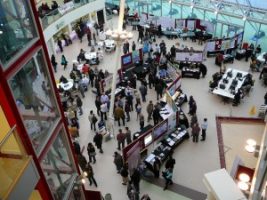 I’d found my soul mate university. How anywhere had managed to fit the mad criteria I’d set out was baffling, but made it seem all the more perfect. It was, quite simply, just right for me! It was going to be this university or no university at all.

See also  Empty nest syndrome: how does it feel?

The hallway was lined with polka-dot laundry bags containing my life, which was being uprooted. Having turned 18 and endlessly discussed the process of going to university with friends and family, I wasn’t actually that bothered. HA! That naïve attitude lasted me until, having unpacked and settled into my new room, my mum made moves to leave. The switch flicked, the waterworks went on, blood pressure rose and PANIC set it. I was being left. On my own.

What if the other nine rooms were filled with loud drunks who cared nothing about their degrees and just wanted ‘a good time’? It was just me and the trees (which, incidentally, I had the most beautiful view of from my large window, over my sizeable desk in my small-but-perfectly-formed-with-lots-of-storage room, on the fifth and top floor of a brand new hotel look-alike building).

I neglected to realise that what I was facing was exciting and full of opportunities. Feeling afraid and therefore somewhat selfish it was perhaps easier to think that Mum got to go back to our lovely, familiar home and I was the one being stranded. However, emotions ran high for both when Mum summoned the courage to leave and walked from the flat, dragging her heart behind her.

With the flatmates met and every invitation to every event turned down so that I could stay in my room in the foetal position, I survived Freshers’ week unscathed. Everything was new; people, places, routine and so on. There was an overriding desperation to skip forward to a time when everything was normal. 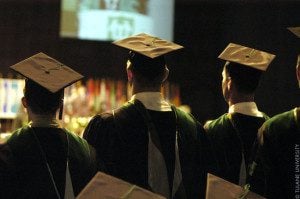 My adrenal glands were in overdrive. Daily calls to Mum: “Did I do this right? Should I have said this? I’m allowing 40 minutes to get to my lecture (…my lecture that was in a building 10 minutes from my halls), is that enough? How do I cook broccoli?” Answers to everything came thick and fast in an intensive period of imparting wisdom and reassurance.

After many weeks away the foetal position was abandoned and replaced with huddling alongside six or seven others on the floors and beds of my flatmates’ rooms watching Eastenders on a Tuesday night.

Panicked phone calls had diminished to daily texts to home just in order to ‘check in’. I’d learnt to look around me in the kitchen where all ten of us cooked dinner together. Shocked, I saw other confused faces staring into pans of carrots refusing to cook on hobs that hadn’t been switched on at the wall.

The flat became a boat, and we were all in it together. A group of people, neither loud nor drunk (for the most part), all someone’s child, away from home for the first time. Why I’d assumed this wouldn’t be the case, I don’t know.

As term proceeded introductions to others outside of the safety of our flat were being made and a network was steadily forming. Friends for every occasion; going to lectures, going out, eating dinner, washing up and most just for idle chat. Unknowingly, at the time I was making friends for ‘having tea with when I’m 80’ too.

Going it alone in a sea of other people started as a mess of wires, tangled and confusing. Now, two years later, it’s an organised switch board. It’s fabulous student life with wonderful people in an amazing place. It’s all based on luck: who you’re put with in halls, who else got onto your course…so many ifs, buts and maybes, that you just make the best of. 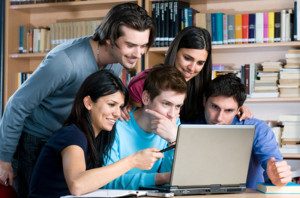 Looking back it was a scary time, living in limbo between the old and the new. The anxiety and worry of what would result if luck wasn’t on my side is relatively, only recently buried.

I never forget that I’m lucky. For some reason no matter how many times I declined offers to go out (longingly watching the others get made up and merry) people never gave up asking. Those perseverant people are now the most cherished friends.

That being said, it’s been a second upbringing for us all. Whilst I pretended to have been born knowing how to cook broccoli (thanks Mum) they’ve showed me where the toilets are in all the clubs that I now love to join them in.

The situation, as it is now, is all I wanted in those lost couple of weeks in the beginning. Perhaps you have to have those weeks of being lost in order to become the big grown-up person who you want to be.

It would have been nice to have had a peep into the future – to see myself walking into a door and being surrounded by my friends erupting with laughter – but maybe the fear and uncertainty makes you more inclined to put in the extra effort to get where you want to be?

Read about a mother’s experience of her daughter leaving home