Home / Looks / Style / Underwear shopping: why is it so difficult?

It is not an exaggeration to say that I have owned some of my lingerie longer than I’ve stayed in most jobs. 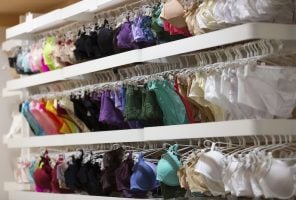 I have knickers, in particular, that are older than some people – real, grown-up people. They have been by my side, or more accurately on my rear end, through two relationships, four house moves and two jobs.

So it was fair to say that it was about time for a refresh.

This is not the first time that I have attempted such an underwear coup. Many times in the past I have gone out with a mission to buy new knickers. I have returned with empty pockets and carrier bags full of flimsies which have forever more remained in my underwear draw, still with their label on, because when I get them home, in the comfort of my own bedroom, when all’s said and done, they are not quite right.

And of all clothes, underwear has to be right.  It is quite possible to wear a dress which is a bit big, or boots that have a lower-than-perfect heel. But underwear that cuts into your bum cheeks is insufferable.

Time after time, my forays into ‘newundieland’ have been unsuccessful and I have reverted to my old faithfuls – greying and fraying though they are. But this time I really do have to sort it out. My favourites are literally falling apart and my poor boyfriend is promising to cut them up and throw them out.

So, last weekend, off we went.  We had two full days to dedicate to the task.  We drove for miles to find the largest malls with the greatest number of potential sources of success.

Almost immediately I realised a key problem – the style of undies that I favour, the ones that I used to buy in bulk in the 1990s (!) are no longer in fashion. I prefer a fairly skimpy thong. Nowadays the fashion, unfathomably, is for big knickers. There was no end of buttock-covering offerings, in silk, cotton, lace. Of thongs there were but a few. In the whole of Reading I found only one style of knicker which was vaguely similar to my 1990 throwbacks.

Now, I am not what they call ‘overly bottomed for my height’. I like to think that I am a perfectly proportioned size 12.  But I can’t stand tight knicker legs. They feel uncomfortable and look terrible. And since I can’t be bothered to hand wash my lingerie I have to be sure that whatever I buy won’t be relegated to the bin immediately after the first 40 degree wash. So I tend to buy one or two sizes larger in order to guarantee long-term comfort – see above comments about the length of time I keep my underwear!

But for some reason a thong which is cute and skimpy in a size 12 becomes what my boyfriend would call ‘apple-bags’ when they scale it up for a size 14 or 16. Just because I want a wider hip measurement doesn’t mean that the item itself has to double in size everywhere else. These pretty little scraps of lace become something you could strain your veg in!

As a rule shops don’t want you to strip off in their changing room in order to try on their lingerie.  And I don’t know about you, but I’m not keen for my private bits come into contact with anything that has been touched and pawed by anyone else. Ew!

So, when I identified something vaguely appropriate – the right style and size – I proceeded to the changing room to try the thong on on top of my other pants.

This is not an effective method of testing whether clothes fit or not. I am pretty sure that no-one tries on a new dress over the top of their current one. And if truth be told, I actually tried the knickers on over my leggings as well as my underwear.  So it’s no surprise that when I got home and carried out a fully appropriate ‘in situ’ test in the bedroom the undies didn’t quite cut the mustard – despite their rather alarming similarity to mustard in colour.

READ  Is there such a thing as too much skin?

So here I am again – with an underwear drawer bursting with silk and lace and yet facing a knickerless future. I know that I must gird my loins and venture forth once more but in the meantime perhaps I’ll just get out my sewing machine and see what I can rustle up…