May the Force be with you. Whether you’re a sci fi fan or not, you’ll be familiar with this line from the Star Wars films. Such a popular line, in fact, that it’s spawned Star Wars Day on May 4th, a time for fans to celebrate all things Jedi. 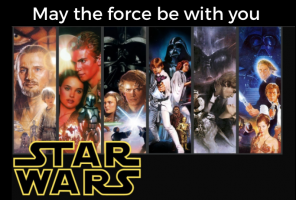 With seven successful films in the franchise, the films have transcended generations and gender, with women, men and children of all ages still avidly watching them, buying the merchandise and waiting with baited breath for the next instalment.

But what does Star Wars mean to us? We asked Katherine, Sheila and Deborah to give us their take on a galaxy far, far away…

It’s funny how Star Wars has become such a huge cultural influence. “May the force be with you” is an exaltation to do well, a comforting encouragement when all is not as it should be and is almost as well known as some Shakespeare quotes.

I’m a 47 year old woman and Star Wars was the first film that my mother, took me to see. We went in the days before cinemas were divided into multiple smaller screens and there was a huge red velvet curtain and we sat in the circle! There was even a short feature before the main film.

One of the great things about Star Wars is that they are sci fi films with competent female characters. They have dialogue and aren’t just a ‘screamer in a bikini’, something that the actress Carrie Fisher is proud of today.

However, in many ways the original Star Wars franchise was definitely not a girl’s film. Aside from Leia, female characters get precisely 63 seconds of dialogue in the whole of Star Wars, Return of the Jedi and The Empire Strikes Back.

READ  Discover the beauty of birdwatching...

Women do fare better in the later movies as there are more female characters. In the Phantom Menace Padme is queen of an entire planet and an important and skilled negotiator. But her character is diluted as the plot diverts toward Anakin’s fear for her safety and his own move to the dark side. By The Revenge of The Sith she’s more of a plot device. So The Force Awakens is a breath of fresh air – at last a woman is the hero of the film.

Life, here on Earth, has changed significantly since the original Star Wars film was released. The president of Lucasfilm, Kathleen Kenedy is a woman with a mission. She championed a more female-inclusive Star Wars and in a galaxy far far away Rey becomes the hero and a significant member of the big three. She fights, she is strong, she is not the first to faint or die. She is properly dressed! Other women are significant. Leia is a strong older woman with – and get this people – grey hair!

So the Star Wars franchise has moved with the times. Women feature as lead characters not just plot devices and more females have lines. This is by no means a given in Hollywood.

Go Lucasfilm, go Star Wars and, in the words of Carrie Fisher, don’t let anyone put you in a slave outfit because you’re a girl.

The Empire Strikes Back was released in 1980 and Return of the Jedi, which, I think, is my favourite, in 1983.  I was in my late teens and early twenties.

That was my time! I thought I was invincible, dangerous even, at least to young men!  When I though I could wear anything, and did. I was a Mod, a Punk, a New Romantic.  And then not.  Just because I could. My hair was red, it was pink, it was green. I remember wearing seven shades of eye-shadow at the same time, and purple – even black – lipstick.  And eyeliner.  Lots and lots of eyeliner.

It was when I first had money, my first job, my first holiday without family, my first love. Followed by my first heartbreak. Such a lot happening in those 40 years. 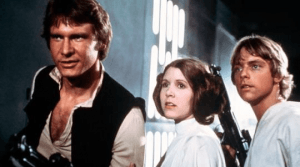 I think it’s great that Star Wars is still the most popular film franchise ever.  In The Force Awakens, I thought Han Solo still looked hot and Princess Leia still rocked. And Luke – well, he was mysterious and enigmatic, as he always was. Age definitely suits him – he looks better than he ever did, to me.

Star Wars grabs the imagination and pulls on your heartstrings.  There are flawed heroes and the vilest of villains. There’s love and there’s hate. friendship and family.  It’s a classic story of good vs evil.

The older films have aged with grace. There is a unique timelessness to the stories – they are fairy stories, fables with lasers, light sabres and kickass spaceships.  I mean, who wouldn’t want to fly around in the Millennium Falcon, preferably with Han Solo, but I’d cope without him!

The second (first?) trilogy, made in the late 90s and early noughties, while enjoyable, lost their way a little, relying too much on technology and not enough on the characters and the story.

Star Wars – the original Star Wars – belongs to our generation.  We made it the success that it is, and passed it on to our children.  They will pass it on to theirs – or at least, mine will, we are a family of geeks!

Star Wars is most definitely, first and foremost ours! May the force be with us, always…

READ  What do we do in the toilet?

I’m a Star Wars fan. I remember the film was released in the US first, in May 1977, then came to London in December before drip feeding to the the rest of the UK. I went to see it in the January – it was my birthday and I felt like I’d been waiting forever to see it. A far cry from the instant release now where it’s available to all. We had build up! 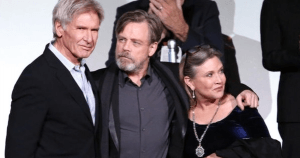 I think it’s interesting that the latest film went back to the original format and special George Lucas formula – low budget, dusty landscapes and rusty buckets that look like they should have been retired.

Many commentators have said that the middle three films – the prequels – were disappointing and that’s why The Force Awakens went back to the nostalgic original.

I’m glad they did and so happy to see the original cast back after nearly 40 years and still looking good. I can’t stand all the hype around how Carrie Fisher’s aged. They all have and I think she looks fabulous.

I had the opportunity of taking my friend’s 10 year old to see it and she’s totally hooked. Star Wars transcends generations and has now been introduced to a new one.

May the Force be with you!

The Force Awakens in Amazon

Star Wars films released in the 70/80s in Amazon

Star Wars films released in the 90s & 00s in Amazon

Star Wars: which order to watch the films