Eleanor Roosevelt wisely said you should do one thing every day that scares you. Now, she didn’t mean walk in front of a car or watch a gory horror film here, she simply meant this… step outside of that comfort zone where you live every day, as that is where true freedom lies. And for me, this meant travelling alone. 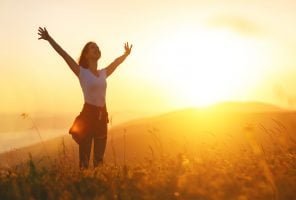 I love the quote, and I suppose I’ve subconsciously lived by it for a lot of my life. Not every day, but these days I realise that fear is where my ‘edge’ is, and therefore, where my growth is. So I tend to listen to it as a positive little voice – most of the time!

I had no idea of just how true this was going to be for me when I booked my holiday and planned to do it alone. Fear was something that was with me from the very first minute. All kinds of thoughts rose up around me telling me I shouldn’t have done it. Who was I to take that kind of luxury? There were a hundred different little voices telling me I’d got it wrong. But. There was another little voice, wiser and stronger – she’s the one I tend to listen to now – that gently told me I was doing the right thing.

Leaving the house after doing my packing, last-minute check in, last-minute idiot checks… doing it all alone. Scary!

Arriving at the airport, travelling to the hotel, arriving and signing in as a lone traveller. Scary!

Every single day I did something scary from that moment on.

Walking out in the mountains alone. Terrifying!

Moving outside the comfort zone

Every time (and this was most days) I left the confines and safety of the all-inclusive hotel complex was tough. When I walked under the underpass towards the volcanic mountains that were beckoning me to explore them, I checked to see who was behind me for the first five minutes!

Men parked next to me in trucks, innocently, but I furtively looked behind me to make sure they drove off again. The morning I walked before dawn to climb a hill for the sunrise, a man shone a torch on me from a dark lock-up. He was probably more nervous of hearing unfamiliar footsteps near his yard. I was convinced of my violent demise. A Woman Travelling Alone…

Now, you might say that I was foolish to put myself in this position, but I say no! I really don’t agree as Bad People are everywhere. Hiding in the so-called safety of a nice comfy hotel is no guarantee of real safety, and oh! I felt so liberated every time I came back.

There was a path-that-was-no-path on the side of a sheer rock hillside, completely eroded, with rocks and stones falling away beneath my feet… it was a big mistake going up there. This I realised once I was halfway along that no-path with nothing to do but turn around, gripping aloe and scrub as I did. Utterly terrifying. Once I realised my mistake, I had to talk myself through every footstep back to safe solid ground. Coming back down to sea level, I had another feeling, and it was this. Unstoppable!

Me, myself and I

I didn’t have a single conversation with another human being all week, except with people on the phone. Just me. Nobody telling me their problems, asking me questions, telling me stories of their day. No banter. No chit chat. The staff were lovely, polite but distant. I was either treated with disdain, or mostly ignored. I felt completely invisible.

I was alone with nothing but my own thoughts for company. All my routines left at home. No laptop to bury my nose in. It was very interesting to see just how many crappy useless thoughts I have in a day. A lot. I also realised just what a sense of humour I had. With no one to bounce it off but myself, it was such fun. I realised that I really like my own company. That I like who I am these days. And I approve of me. A very nice thought.

On the Wednesday, I had fear of a different kind. A subterranean, lurking, primordial, menacing dread of a fear. It crept up and washed over me in great heaving waves of pure terror. It was a nameless fear from many many years ago. A fear of falling off ‘The Edge’ of life. This was something that had happened to me a couple of times very powerfully in my early twenties, leaving me thin skinned and vulnerable. And it was there, with me in the hotel.

See also  Swapping the Caribbean for a caravan

Uncoiling itself from around my spine and visciously breathing its threat of imminent death into my lonely face. No, it was worse than that, it was the threat of oblivion, and its breath blew all over me. That fear was back. I was 22 again. There were no thoughts. Nothing that was even remotely tangible. The funny thing is, I think it was prompted by me asking to change rooms. Which in itself was liberating, speaking up and asking for a room change.

They gave me a very nice corner apartment, eight floors up. There was nothing next to me, and nothing below but crashing seas and rocks, 80 feet straight down.

I woke up in the middle of Wednesday night in the cold sweat of sheer panic that accompanies night terrors. I literally felt as if I was teetering on the edge of a precipice, about to topple into a petrifying dark bottomless abyss. By the next morning I had become interested in this fear. Little by little I began to see it for what it was. A chance to learn and understand a little more about myself and my own triggers. I realised it was panic attacks. Being a therapist, I knew the ‘hold on, it will be over in a minute’ approach is by far the easiest.

Out of all the fears I’d faced in the previous few days, this was by far the most devastating. And yet, by outward apprearances, it was based on absolutely nothing.

And therefore it was the most healing. I have had a phobia of ‘edges’ in the form of mountain roads forever. Interesting eh?

See also  Levelling a lawn: what you need to know

By the middle of Thursday afternoon, I felt liberated. I felt as if a weight had been lifted that I hadn’t even realised I was carrying. The aftershocks in the form of minor panic attacks washed over me for a few more days, even carrying on after my arrival home. But I was sort of comfortable with them. I realised they were the death throes of a monster that no could no longer live by feeding off the taste of my fear.

I remembered the havening technique by Paul McKenna yesterday. It’s a geniusly simple little technique that lifts old trauma out from your nervous system where it can live undetected for decades sometimes, waiting to re-visit you when you least expect it. I felt that old fear finally transmute into something far more postive as I followed the process.

And that was pure, simple freedom!

Today, I faced another fear. On Friday I’m on the radio. Gulp! I’m doing a talk in front of 400 or so people on Sunday.. Eek! The story goes on, and I think I might use the havening technique far more often now, just to bring down the volume of that old friend’s little voice that tells me I’m doing it again…I’m on the ‘Edge’.

Staring your own fear down will make you feel ten times stronger than you did before. In fact, I would say it’s left me feeling slightly invincible somehow.

Would I go on holiday again alone? Bloody too right I would. In fact I think I might be doing this on a regular basis….