You’ve no doubt eaten Spanish dishes before, even if you’ve never been to the country. But, you haven’t truly sampled the cuisine until you have tried it in its place of origin. 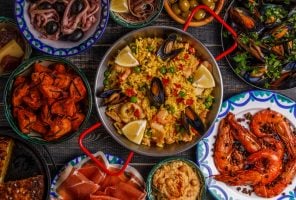 This European destination is one of the most visited and it’s no doubt that, in part, Spain holidays are popular due to the mouthwatering cuisine that can of course be enjoyed al fresco thanks to the warm and sunny climate.

To help you decide what to choose to accompany your sangria, here are five of the dishes that you must try.

These small bite-sized pieces were once served as nibbles alongside drinks in a bar. Today, you’ll find restaurants throughout Spain that are dedicated to this cuisine.

Madrid and Barcelona are two of the best cities to sample it. Patatas bravas and padron peppers are just a couple of the tasty treats that await you – but the beauty comes in that you can pick and choose smaller dishes to make up your feast.

You won’t get food envy with tapas, it’s perfect for sharing, so you can have a little bit of everything – which is even better when you are in a large group.

If you are staying in the Basque region, in northern Spain you’ll find a dish very similar tapas but it’s called pintxos.

While still bite-sized, this food is typically served on a stick. San Sebastian is Europe’s culinary capital and one of the best places to try this dish.

Make sure you try La Gilda, which is pickled anchovy, green olives and pickled peppers, believed to be the first dish of this kind.

This rice dish originated in Valencia – specifically on the east coast on the shores of Lake Albufera and this port city is still the best place to try it. The name comes from the Catalan word for pan because it is traditionally cooked and served in a large, round, thin one.

It was originally cooked with water vole, although you won’t find this on the menu today. Instead you can order meat (which is often chicken) vegetables or seafood, commonly served in the shells. This tasty seafood option usually includes squid, prawns, mussels and clams so head for the coastline if you want to try this one. You also have the option to choose mixed paella, which offers a bit of everything.

This cold soup originates in the Andalusia region and is a refreshing dish, especially on a particularly hot day.

This dish dates back to when this area was largely used for farming. It was made with stale bread and perfect for those working out in the sun all day.

Today, it can be eaten as either a starter or a main and is bread and tomato-based, often served with a variety of raw vegetables that will differ depending where you sample it.

There is a Spanish saying that goes, ‘De gazpacho no hay empacho’ which means, you can never have too much of a good thing – or too much gazpacho.

Also known as tortilla española or tortilla de patatas, the Spanish omelette is a simple but staple dish.

There are many stories that surround the origins of the omelette including that it was used by an army general during the siege of Bilbao as a cheap way to feed his men. Whatever the true story, it’s led to a tasty dish to put on your menu when you’re in Spain.

It is made with potatoes, onions, eggs and olive oil – although there has been much debate around whether the onion should be included or not.

Depending where you have it, you may find the traditional ingredients are added to with the like of cheese, pepper or chorizo. It tends to be served in a triangle slice with a side of salad.

So, which dish are you going to order first?