Cure the NHS: Just the start of the healing process. A series about Julie Bailey, CBE

The Francis Inquiry into the regulatory system within the NHS took place after a long  campaign by Julie Bailey and her dedicated team at CureTheNHS. The inquiry acknowledged the “appalling suffering” of patients at Stafford Hospital and made 290 recommendations to improve patient safety.

Many campaigners would have patted themselves on the back and put their feet up at this point. But not Julie Bailey and her team.

Julie and her team are still being contacted every week by patients and carers who are desperate for help. In other words, Julie is acutely aware that despite the inquiry’s recommendations, there is still much work to do on the ground. For Julie, the inquiry was just the start of the healing process within the NHS.

Julie’s case load doesn’t diminish. She tells me she receives requests for help every day; on average she gets 30 new cases to deal with every week. Some concern patients currently in hospital and some are from patients or their carers trying to deal with the aftermath of poor care.

Julie and her dedicated supporters work for free to support and advise all those who contact them. Julie earns nothing from the work and lives on a shoestring herself from money earned by giving talks. She says with typical understatement: I’m not an expensive person.

In order to deal with the volume of enquiries they now receive, CureTheNHS is to streamline the way it works.

The group is planning to develop a website to provide key advice and a signposting service to help many more than they do already. It is hoped that in due course, the website will also house easily accessible information about hospital and ward performance.

In summary the website will become a recognised place to go for anyone needing advice because they are experiencing difficulties with hospital care. And critically, it will become a window for the public into hospital performance.

Over the longer term, it is hoped that the group can also extend its remit and expertise in order to help those experiencing poor care in nursing and residential homes.

For Julie it is critical that CureTheNHS remains financially independent from any vested interests. She smiles wisely as she says he who pays the piper calls the tune.

So to preserve the group’s independence and autonomy she has taken on the additional challenge of raising the money to fund the website. In the longer term, she hopes that the group can also raise enough funds to pay a living wage to her and others working for CureTheNHS.

Protecting your loved ones

In the meantime, before the website is ready, Julie offers this advice to anyone concerned about their own experience or the experience of a friend or relative in hospital. If something is going wrong, then speak up, speak up quickly and continue to speak up until something changes. Always be calm and polite but be determined to raise your concerns.

“Start with the senior ward staff and if nothing changes ask to speak to the person in charge of nursing/clinical care within the hospital. If there is no improvement take your concerns outside of the hospital to the patient’s GP, and the patient’s MP, the Clinical Commissioning Group and Healthwatch. You can also leave feedback on the Care Quality Commission website or email them on enquiries@cqc.org.uk but be aware that the Care Quality Commission does not deal with individual complaints.”

The secret is to tell as many people as you can, keep a record of what has gone wrong and who was involved. 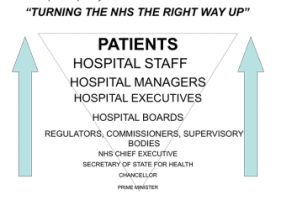 Seven years ago, Julie was living a quiet life in Stafford, running a café and a dog grooming parlour. Now she is No 2 on the Woman’s Hour Power List of Game Changers; she has a CBE and she is frequently asked to advise and contribute to high-level discussions on public policy matters. She has a clear vision of what still needs to happen.The NHS needs turning the right way up with the frontline allowed to lead. The frontline knew what was needed to make my mum better but that wasn’t the priority. The priority was whatever the hospital board said was the frontline’s priority. The board’s priority is usually what the Department of Health says has to be their priority. It’s not about safe patient care; it’s still about meeting targets.

Julie reels off a list of examples of targets which are not patient centred. In the list she mentions “comfort rounds.” when patients are asked if they need the toilet, a drink or pain relief.

Success is measured on how often the patient is asked and not if the patient receives pain relief, is taken to the toilet or is given a drink in a timely manner.

It’s glaringly obvious when put like that, but Julie feels she is still having to fight for change. 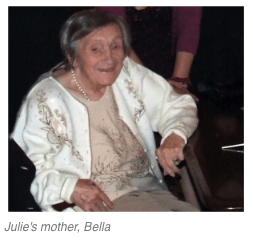 How has Julie made the transition from small town café owner to activist and public figure? The answer is through sheer determination and hard work. She tells me she read her way into the role.

I’ve empowered myself through knowledge

I’m so inspired by Julie. Really inspired by the idea that an ordinary woman can make such a difference. Imagine what would happen if more of us empowered ourselves through knowledge, if more of us stood up to be counted when things are not right, if more of us were willing to put in the hours and not give up when the going gets tough. I’m excited to think that Julie isn’t a history book heroine on a dusty library shelf. She is alive and making history now.

I think she’s inspired me to be a better person.

If you would like to get involved with the CureTheNHS  and help them to develop their charity please get in touch via their website www.curethenhs.co.uk