Home / Happiness / Family / The things we do for love!

No I don’t mean ‘walking in the rain and the snow when there’s nowhere to go‘ as 10cc suggested many moons ago, but taking to heart and getting involved in the interests of loved ones.

New relationships often mean new interests and hobbies, but sometimes it can take a while for those interests to come to light. 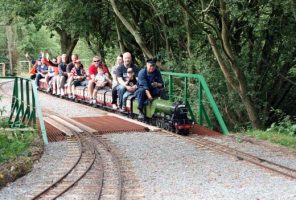 My son’s interest in all things ‘train’ started at the age of two after a Santa Special trip with his grandparents. We then started making regular trips to our local park with a miniature ride-on railway which reignited my husband’s interest in trains.

I am now resigned to the fact that my husband and son share a passion for trains. Fortunately not in the nerdy train spotting sense that would give me concerns about my choice of husband and son’s future girlfriends, but in a lively interest in a local railway where they are both members and my son gets to play with his prized possession – a remote control garden sized train!

On occasion over the past few years my daughter & I have helped out as station staff, after pleas that the railway was short of volunteers over a bank holiday weekend. Learning the ropes wasn’t too difficult but I did need to undergo some training to ensure all bases were covered and satisfy the railway’s insurance.

So one chilly morning in February (when frankly I would have been much happier tucked up in my bed) I embarked on my training. I was pleasantly surprised at how interesting it was, and the training was very thorough, covering the roles of station staff and guard duties.

Although I paid full attention to the guard training, I didn’t really think I’d have to take on this role as the guard is fully responsible for the train. The training came to an end, and my poor brain was reeling with protocol for using radios, checks to be made before a train departs and all manner of other things to remember.

Then to my horror I was asked to guard a train. Yikes! I was terrified.

One of the other ladies who was an experienced guard saw my terror and said she would sit in front of me to give me a bit of confidence. Grateful was not the word! So off we went, with only a few guys from the course as passengers – scary enough, but if anything happened I was in capable hands.

I breathed a huge sigh of relief when we got back to the station. I felt quite chuffed (no pun intended) with myself and by the time I got back my family had arrived to see how I was getting on.

My feeling of euphoria soon evaporated as I spotted another train waiting to depart but no guard in sight. Even worse, it was full of passengers from the park, not railway members. I started to sidle off toward the yard when the station master asked me to guard the train. Yikes and triple yikes! No help this time, this was my first proper run by myself. Well, almost – my son Charlie also jumped on the train to catch a ride.

So after a wave of my green flag and a blow on the whistle we were off. Charlie was brilliant at helping me out, and I soon grew more confident.

Until I spotted a sleeper on fire on the opposite track. Not a huge, towering inferno, but a fire nonetheless. I thought back to my training (had it only been an hour ago?!) and pushed the red ‘stop’ button on the guard’s van but it had little effect, and the three sharp blows on my whistle went unheard.

See also  Bizarre divorce settlements from around the world!

From guard to firefighter…

At this point Charlie calmly turned round and told me to wave my red flag (which I had totally forgotten about). The driver looked round to see me frantically waving the flag and stopped the train. I told him about the fire, collected the large container of water from the guard’s van, then legged it back through the tunnel to douse the fire.

There was a moment when I thought the flames might leap back to life (like those annoying birthday candles at kids’ parties) then got my sensible head back on. The fire was out, I could go back to the train.

We continued chugging along and as I sat there thankfully knowing I would soon be back at the main station, (wondering at the stress of it all and that people actually did this for fun!).  Charlie turned round and said “Oh mummy, I forgot to tell you that when we stopped for the fire you should have put your red flag in the middle of the track 20 yards behind the guard’s van to warn any trains coming behind you.”

Having thought I had done pretty well, I realised there was still a long way to go before I would feel like a fully fledged guard  but was incredibly glad to have had my son with me and was truly amazed at his knowledge for an eight year old!

I’m hoping that any future involvement at the railway will be restricted to station duties, but I really am glad that I can take part in an interest shared predominantly by the male half of my family and I know exactly where I will be for the next few bank holidays.

See also  Notes from the Auvergne: Christmas in France

Ah, the things we do for love…