Home / Happiness / The science behind… keeping your resolutions

Traditionally, New Year is when we decide to change our habits – sometimes quite radically. 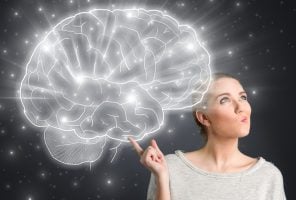 In fact, statistics show that 32% of the UK population admit to making resolutions at the beginning of January.

But how many of us manage to keep our resolutions? Well, according to research, women may have more difficulty staying away from temptation and sticking to their resolutions.

And what makes it so difficult? We know what we need/want to do and we start off full of determination and manage to keep going, possibly for several months. But all too often we give up and go back to our old ways. Why?

You’ll be pleased to hear that it’s not just about willpower or the lack of it. There is a scientific reason underlying our failure to keep resolutions. And the responsibility lies principally with two small almond-shaped areas, called amygdala, in the frontal lobe of the brain: one on the left and one on the right.

They are responsible for how we perceive emotions and control aggression, and they help to store memories of events and feelings so that you are able to recognise similar incidents in the future.

Here’s an example. Let’s suppose you have been bitten by a dog. The amygdalae will have helped in processing that experience. The next time you see a dog, they will ‘match’ the animal with the bite and increase your fear/alertness so that you can protect yourself.

It’s fantastic that we have this back-up mechanism to help us when we are faced with danger, because it prompts us to take action that aids our survival – often known as ‘fight or flight’.

So how does this relate to our resolution breaking?

Okay, a little more science. Functionally, the right and left amygdala behave differently. Although they work together to store, encode and interpret emotion, they have independent memory systems.

The right amygdala is associated with negative emotion, especially fear and sadness. It plays a role in the processing of fear-inducing stimuli and making you afraid.

Back to the dog bite incident…

You are conditioned by the right amygdala to avoid anything that has made you afraid in the past – hence your fear of being bitten again.

In scientific terms, fear conditioning is when a neutral stimulus acquires aversive properties. When we are presented with a conditioned, aversive stimulus, it is processed within the right amygdala, producing an unpleasant or fearful response. The emotional response conditions us to avoid fear-inducing stimuli.

The right hemisphere is also linked to declarative memory, which consists of facts and information from previously experienced events and must be consciously recalled. It also plays a significant role in the retention of episodic memory – the autobiographical aspects which allow you to recall your personal, emotional and sensory experience of an event. This type of memory does not require conscious recall. The right amygdala plays a role in the association of time and places with emotional properties.

It’s almost like it runs through a card index of emotions and events mixed together and then induces the emotional best match to keep you safe.

How about those resolutions?

When you determine to lose weight, quit smoking, go to the gym regularly or eat healthily, you are creating potential stressors which can cause ‘amygdala hijack’.

Imagine you are in a scene where there is a very delicious chocolate roulade on offer. Full of temptation…

First of all, the left amygdala, which is central to your reward/pleasure pathway, does what it does best and activates your craving for all that sweet, creamy, chocolatey taste.

You begin to feel in a bit of a quandary… you don’t want the cake… you do want the cake… just a bit won’t matter… I can run it off tomorrow. The self talk is conflicting.

This is where the amygdalae step in. They recognise the emotions we are feeling and swing into action inducing us to eat the cake because, according to its records, that’s what will make us feel better.

Plus, another, unfortunate whammy is that one of the side effects of ‘amygdala hijack’ is reduced blood flow to the frontal lobe. This part of the brain is responsible for clear thinking. If it doesn’t have sufficient blood flow then your thinking may become foggy and you are more likely to make a ‘wrong choice’ – like reaching for the chocolate roulade when you have resolved to lose weight.

Is there a difference between male and female amygdalae?

The short answer is ‘yes’. Studies have revealed that, in females, the amygdalae reach their full growth potential approximately 1.5 years before the peak of male development.

However, the structural development in males takes longer than in women and their amygdalae are larger on maturity.

There are also differences between the way male and female amygdalae function.

A group of men and women had their amygdalae activation observed whilst they were watching a horror film.

See also  A letter to my mother...

The right amygdala is also linked with taking action as well as being linked to negative emotions, which may help explain why males tend to respond to emotionally stressful stimuli physically.

The left amygdala allows for the recall of details, but it also results in more thought rather than action in response to emotionally stressful stimuli, which may explain the absence of physical response in women.

Another study found evidence that on average, women tend to retain stronger memories for emotional events than men.

So, not going into the finer detail, refusing that roulade would be easier for a man than a woman.

How can we change things around?

There is a range of advice out there, from taking baby steps, setting goals, making your resolutions manageable, having a quit buddy etc.

When what we really need to do is deactivate the amygdala. You can do this using a simple technique such as The Balance Procedure – which restores the natural balance in your energy system so that you are relaxed and able to make rational decisions.

Emotional Freedom Technique (EFT) can also help, as clinical research has shown that this calms the amygdala and enables you to see things clearly.

So, now you know why it’s not easy to stick to those resolutions. Could it be time to take action.