Home / Health / The power of a good night’s sleep…

People are proud of all kinds of odd things; not using all of their holiday from work, getting to the airport at the last minute… but perhaps the oddest one is the boastful claim “I only sleep six hours a night”. Without a thought about the power of a good night’s sleep. 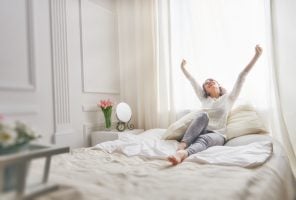 I’m not talking about the new parent who desperately wants to sleep but a crying baby demands their attention or the person working three jobs to make ends meet. Not those people. I am talking about the ones who brag they just don’t need it.

The expected response is to be in awe of their impressive superhuman powers, then acknowledge the world would probably fall apart if they checked out of it for more than a few hours a night. In fact Emily Blunt or Carey Mulligan should probably play them in the next Marvel blockbuster.

Sleep, or lack of it, is an odd thing to be proud of but there is a lengthy history of this badge of honour. A long list of well-known people reputedly operated at high-functioning levels with just a few hours of shut-eye. Leonardo da Vinci, Bill Clinton, Margaret Thatcher and Martha Stewart all perpetuate the myth that successful people don’t need to sleep.

Actually researchers claim only about 1% of the population are genetically wired to function well on less than six hours of sleep. Many of those who claim to be in that tiny group often sleep much more than they admit as they don’t include dozing in the taxi on the way to catch a flight, snoozing on the sofa in the evening or playing the nodding dog game in a boring afternoon meeting.

Proud to be a super-sleeper

Why do we applaud people who don’t sleep when study after study warn us lack of sleep is associated with depression, stress, mortality and other equally horrifying consequences? Try this little experiment. Ask your friends or colleagues how much they sleep at night. I bet many will proudly proclaim they only need five or six hours, sometimes less. Really, I respond, I easily get seven or eight most nights, sometimes even nine!

You will hear the gasps, followed by disbelief, and then comes the sneering. I am now identified as a weakling of the species. Sleeping is for wimps. But the honest truth is I like sleeping. I love waking up after a good night’s sleep, it makes me feel like I can tackle anything during the day. I’m more productive, energised and generally feel content. I am not going to apologise for that.

I can only conclude the social currency earned from not sleeping is a reflection of our self-centered opinion about our importance. The world will miss our contribution if we are not involved in it 24/7. Or maybe our fear of missing out means we have to be constantly connected, otherwise we may not feel part of the latest social media maelstrom that is unfolding in real time while we nap. Or could it be that our thoughts are just too important and vital we can’t switch them off.

Does any of this explain why sleeplessness is respected? I don’t know, but I do know lack of sleep is nothing to be proud of. If we value our health, wellbeing and overall contribution to society we need to stop glorifying people who don’t sleep and start calling them out for their casual disregard for a fundamental requirement of a healthy life.

And as for my fellow sleep-lovers, we should be celebrated. I can see it now; a new breed of comic book hero, her head hits the pillow by 11pm and she bounces out of bed every morning refreshed and ready to fight the bad guys.