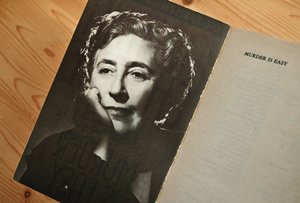 She’s known as the Queen of Crime to her legions of fans. And Agatha Christie’s works have stood the test of time, with her first detective novel published almost 100 years ago.

That was when Hercule Poirot first came on the scene in The Mysterious Affair at Styles, with his funny walk, egg-shaped head and distinctive moustache.

I confess to being something of a Christie geek. I first read one of her iconic books, Murder on the Orient Express, when I was about 15.

And my brother told me whodunit when I was halfway through! I didn’t believe him – even he wouldn’t be that cruel – but he’d been telling the truth. Twenty five years on, I still haven’t forgiven him.

But even with that disappointment, my interest was piqued and I decided to read a few more. This turned into a mission to read all of her 78 crime novels, as I frantically scoured libraries and second-hand bookshops to find those I hadn’t read.

The sheer joy of coming across an unread Christie is one I still get today with a few authors, but as not many are as prolific as her, it took me a while to find and read them all, probably five years. I now own most of them, and have read them over and over again.

What’s the point of rereading a detective novel?! 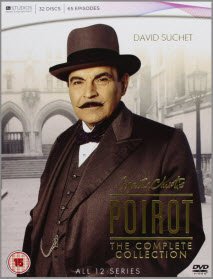 Well, I couldn’t remember who was the culprit in all of them – I can now – and they are also such good stories that the great unmasking at the end is only a small part of her tales of human interactions, psychology, relationships and family feuds.

My pin-up is David Suchet as Hercule Poirot, to me the definitive version. He captures everything just perfectly, making Poirot the force to be reckoned with from the books (previous incarnations make him too silly and comedic).

And Joan Hickson as Miss Marple is surely unrivalled. To me, the modernisation of Marple has killed off the TV franchise. Her little old lady act is superb, with her razor sharp mind and innate understanding of human nature lurking beneath the fluffy hair.

Agatha Christie caused a major mystery herself when, late in 1926, she went missing for 10 days, her empty car discovered at a chalk quarry. Her disappearance was the subject of much debate, and she was eventually discovered in Harrogate at the Swan Hydropathic Hotel. This is now called the Old Swan Hotel – I’m such a Christie fan I’ve even been there!

She never explained her disappearance, widely believed to have been prompted by her husband Archie’s infidelity. She was registered under the name of Teresa Neele, and his mistress was called Nancy Neele.

Her second husband, Sir Max Mallowan, was an archaeologist, and she uses several of the settings from her travels with him for her novels.

On the page and on the stage

Although, like most Christie fans, I love Poirot and Miss Marple, her standalone detective novels, for the most part, are also good.

But don’t get me started on Tommy & Tuppence

– yes I’ve read them all at least twice, but just couldn’t bear this couple of amateur sleuths. There’s none of the exaggerated genius of Poirot or the understated knowing of Miss Marple – they just seem to spend all their time chasing around having adventures, all a bit too lightweight for me. Bring on the dark side. 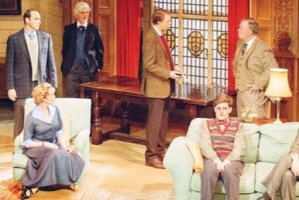 As well as being an accomplished novelist, Christie was also a respected playwright. Her most famous, The Mousetrap, is the longest-ever running play. It debuted in Nottingham in 1952, before taking up residence at the Ambassadors Theatre in London. From there, it moved to the larger St Martin’s Theatre in 1974, where it has been performed from ever since.

READ  How to self publish

And yes, I’ve seen it! The audience is asked right at the start not to give away the plot, so my lips are sealed. But it is well worth seeing if you fancy a change from the usual West End shows.

Just what is it about Agatha Christie?

The words ‘page turner’ are used far too frequently in my opinion, but I literally could not put her books down (this was before I had kids and could often read a book a day on holiday).

She has a wonderful knack of throwing you off balance. Sometimes it’s the obvious person. Sometimes it isn’t. Sometimes it’s someone who you didn’t even really register as one of the suspects. Again, without giving too much away, she breaks through all of our expectations and the grand reveal is wonderful, every time.

Far too difficult to pick just one, here are a few of my favourites. If you’ve never read a Christie, I recommend you start with an early Poirot to get a feel for him and his cronies, like Captain Hastings, Inspector Japp and Miss Lemon.

Actually, there are very few of her books I dislike – Tommy and Tuppence aside – apart from a few where she enters the world of espionage.

Classic Christie, to me, is the body in the locked room, the assembled group of suspects, the red herrings and of course, the Belgian detective with the little grey cells who ‘does not approve of murder.’