First it was the no make-up selfie. Then tipping a bucket of ice water over your head. And now the latest craze to sweep Facebook is the Motherhood Challenge. 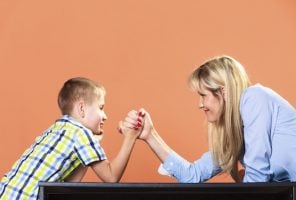 Whether you agree with it or not – and let’s face it, this seems to be a divisive subject – it’s sparked a lot of varied responses from people.

What is the Motherhood Challenge?

The idea is to post a few photos of your kids that make you happy to be a mother and tag other women in to do the same. A seemingly innocent request.

And a lot of women responded by posting pics of their offspring doing various activities – which resulted in my Facebook feed being full of pictures of children that I didn’t actually know!

Most mothers are happy and grateful to be in that position, so would have no problem posting pics of their kids, and surely that is what the whole thing is about? But the issue has caused a whole lot of debate – whoever started this didn’t expect the backlash, I’m sure.

Why has it been so controversial?

Any mother knows it’s certainly not Disney having kids 24/7, and it’s quite possible that maybe the mothers who struggle have seen this is as an attack on their parenting skills.

Having kids is challenging. There is no handbook, no instructions and most of us just wing it half the time and hope for the best. Some days can be a battle of wills in which you hope that you, as the mother, are winning but it’s draining, time consuming and sheer hard work being responsible for another human being.

See also  Hugs are good for you

Some people cope better than others, and some days are easier than others. But not many people just breeze through it all without occasionally wanting to tear out their hair.

I’ve seen comments that the Motherhood Challenge is insensitive to women who can’t actually have children, or have lost a child for whatever reason. Or maybe that it’s on a par with all the postings of Christmas trees at Christmas, in that it’s become a bit of a competition.

While motherhood is challenging, do we have to turn it into a challenge?

There’s invariably some competition amongst mothers, vying to have the brightest, best-dressed child with impeccable manners. But I think the whole point of this particular challenge, which has got a bit lost along the way, is for mums everywhere to celebrate motherhood. The best and worst job in the world.

So how about we just raise a glass to all the mothers we know, who are all trying to do their best, and all the other amazing women out there who aren’t mothers – whether through choice or otherwise?

Now pass me the wine… before the next Facebook craze begins.