The year was 2008. I was 54, taking a week’s holiday in Malta with Evelyn, my 83 year old worldly travelling companion when the first invasion occurred. My first Menopausal Moment. 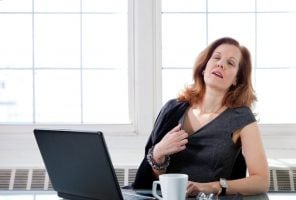 A menopausal woman having a hot flash at her desk in an office.

I was suddenly incredibly hot, a ferocious, burning heat engulfed my body like a plague of imaginary solar mini beasts. What on earth was this intrusion, this inexplicable experience?

Unable to comprehend the reason for this surging warmth while lying in bed one evening, I concluded that Malta was the cause. I was, after all on a Mediterranean island. Everyone must feel hot in Malta!

It was only on my return to the UK that I discovered I was still hot. Like many ladies of a certain age, it didn’t matter whether I was in Malta or Cleckheaton. The Menopausal Moment or MM had arrived!

For years I scoffed and joked when observing ladies frantically fanning themselves with beer mats, newspapers, paper plates, or concert programmes, in an effort to create a cooling draught.

I recall my geography teacher, with her peaches and cream complexion, spouting so knowledgeably about isobars and isotherms, then suddenly like a chameleon, change into the scarlet woman as the ‘Moment’ came upon her. At the time I thought she was simply frustrated by her pupils’ lack of competence and interest in all matters geographical. How wrong I was.

Then, friends’ stories of MMs came flooding in.

My American friend Linda experienced an acute moment whilst in Gulliver’s Pizza Restaurant in Chicago. It was so momentous, she actually picked up a generous slice of Margherita and wafted it vigorously in front of her sweltering forehead. Desperate situations require desperate measures. The pizzas, by the way, were of excellent quality.

Then came the cardigan brigade, ladies who suddenly divested of their upper coverings in the blink of an eye, only to reverse their actions minutes later. I remember my own mother participating in these bizarre rituals never understanding why she exhibited such strange behaviours. Taboo subject I suspect.

READ  Menopause: why you should get moving

So what is a menopausal moment?

For me a MM, to which we shall now refer, makes me speak weird words. I’m light headed before the alcohol. I suffer not from forked tongue, but burning tongue. I ask you, what’s that? Research it on the internet and yes, believe it or not it is a symptom of the dreaded menopause.

I now know why women were designed with a cleavage, well some women anyway. Its purpose is to channel the droplets of perspiration, nay, the rivulets of perspiration… oh, let’s be perfectly honest… the fountains of sweat which cascade like Niagara falls periodically throughout the hours of darkness into daybreak.

The nape of the neck becomesa tropical rainforest as the forehead steams then condenses on the memory foam pillow. Why a pillow should wish to remember these incidents is beyond me. This is certainly not a dream, but a nightmare.