A three-part series based on the book ‘They Come Back In Dreams – A Nine-Year Study of a Family Visiting from the Other Side’. 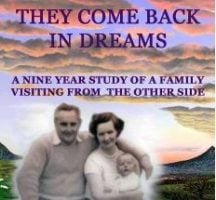 You’d think seeing and communicating with my passed-over spirit people and learning how they’d reverted to a serene, happy perfection back ‘home’ was incredible enough – but I was to witness more amazing things. Apart from being shown homes, activities, socialising, studying, travelling and other more mysterious things, the following incredible phenomena are, I think, of exceptional interest.

Due to the length of time I’d been having and studying these real spirit dreams, I came to notice that whenever I saw my little brother he always appeared differently from all the others. He and I rarely looked one another in the eyes, we rarely communicated directly and more often than not he was sitting on my lap with the back of his head to me, or else I saw him sideways-on.

This seemed odd to me until I realised that this was his ‘trace’ – a part-spirit of his total self left behind when he reincarnated into another life. It’s as if our souls can split in two (possibly more), both conscious at the same time, and this was supported by my own research and the fact that many spiritual sages have written about this phenomenon.

It is my belief that Paddy left the spirit world after a fairly short time to reincarnate once more into a physical body, something I’ve read is more common for those who die at a young age. The trace he left behind, of a perfect body, was still conscious and could communicate not only with me on this side but also with those on the other side, only not in such an alert way as the others did.

Another wonderful thing I experienced was that of meeting my passed-over elder sister, who never came into physical life. Now this was one spirit who had been visiting me in my dreams from time to time for many years throughout my life. To begin with, I dreamed of her as a baby and I was always amazed, when I woke up, that I’d felt such an enormous amount of love for a baby I didn’t know.

I didn’t believe in life after death then, and it certainly never crossed my mind to think that this baby was actually a real spirit, let alone that of my miscarried sister! When I met her in dreams after my father died, it dawned on me who she really was. We had such love for each other and I met her on several occasions, often with my mother after she’d passed, and I also saw her at different ages; as a baby, a young child and a teenager. As a teenager she had long, dark hair which I could really feel when I reached out to touch it.

There were many wonderful aspects to the spirit world that I learnt and wrote about, too many to be included here, but I cannot miss telling you about this – perhaps the most heart-warming of all. It’s about love.

When we pass it would seem that love becomes all-important: those who had been deprived of love in their lives will manage to find it and feel it again; those who were never all that demonstrative find that they become more so, and there’s no shortage of hugs and kisses ‘back home’ – it seems to be the norm.

I felt an amazing love for some of my family members when meeting them in the dreams and, incredibly, I was able to feel the love they had for me. This could be singly, from them to me, or feeling it and receiving it at the same time – what I call ‘love passing between us’. Sometimes the feeling of love was almost overwhelming, but at others it was a gentle, loving feeling of togetherness.

There is so much to look forward to when our time comes!