Home / Happiness / The joy of singing

I love music, and specifically the joy of singing. I always have and always will. And singing helped me find ‘me’ again… 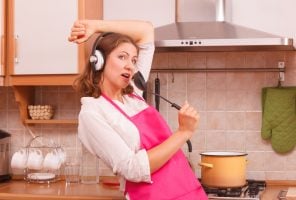 It’s part of my DNA, what makes me tick and at the core of who I am and how I express myself. It’s how I wind down AND rev up and my two choir sessions a week represent the ultimate pressure release for me from the craziness that is being a full-time working parent.

In the years since my son Owain was born, singing has helped me reclaim myself as a person. No longer am I simply Owain’s mum coping with his serious medical condition. Or a stressed out business manager in the Arts, but I’m also part of something else, something also special. I’m part of a body of voices that can create emotion and excitement in performances that not only we, but others, enjoy immensely.

There’s nothing like totally immersing yourself in something you care about and enjoy to the extent that you forget. In that moment, who you are, what you are and what’s bugging you. For some people, sport does this job equally well but for me, it’s music that takes me over.

I urge you…be brave, consider joining a choir or singing group and then actually do it! You’ll find the best ever ‘OFF switch’ for a bad day in the office, family worries and the general clutter of everyday life.

And then there’s the comradeship

Never to be under-estimated and always to be appreciated. You’re singing with (in my case) up to 100 other voices, all with a common purpose. You sit next to the same people every week (I’m one of the ‘Back Row Sopranos’ in the Fire Choir…they know who they are!) and you gradually find out about them and they find out about you.

READ  Dealing with the challenges of being a Caregiver

You start to have a laugh (or ten) on the way and soon enough, they’re good friends that you look forward to seeing every week.

Like many of you reading this, I’ve done my fair share of singing over the years. In my school years, I even made it into a Liverpool pop group called Blue Poland and we had a whole lotta fun tinkering around the edges of ‘making it’.

There was a BBC2 documentary and even the dizzying heights of a BBC2 documentary about new bands and a Radio1 session for the brilliant and much missed John Peel. But our album deal never showed up and then university beckoned and, as they say, that was that until…

How about a workplace choir?

It wasn’t always like this for me. I spent several years after University not singing just concentrating on my career but I somehow found my way back into singing a few jazz sessions in London. I finally joined my workplace choir at the British Medical Association. It does make me smile that Gareth Malone thinks he’s discovered workplace choirs but we were doing this back in the day and it’s nice to see a resurgence of the idea, thanks to the BBC series. And, by the way, I am a big fan of Gareth.

The reason why workplace and community choirs work so well is that singing is a complete leveller. It breaks the ice and is completely inclusive. I, for one, love seeing people from all walks of life, all ages, differing opinions and tastes all come together to work towards creating a joyous noise that is unstoppable, infectious and much of the time, filled with emotion. Experiencing the joy of singing.

READ  Are you being true to yourself?

Or in your local community? 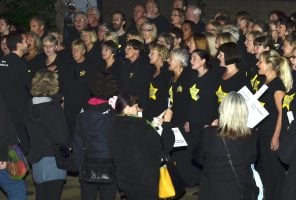 Rock Choir singing to support a Stand Up To Cancer

I witnessed the power of singing first-hand through being involved in two successive Gathering Wave projects, brilliantly conceived and put together by the Music Pool, Herefordshire’s community music organisation based at The Courtyard. The idea was simple but took a lot of organisation and effort.

Grab a whole bunch of community and children’s choirs. Then chuck them in a large room for several group sessions, a specially commissioned piece of music and some less difficult tunes to get their teeth into. Then, hey presto, a bit of magic occurs.

Add in a couple of brilliant and patient choir masters, one or two inspirational soloists and it’s just about perfect. (Njabulu, we love you!)

Twice I’ve sung in the Gathering Wave Concert at Hereford Cathedral as the end concert of the Three Choirs Festival and twice, I’ve been bowled over by the wall of sound and the passion from hundreds of voices, from the deepest basses to the beautiful trebles of the school children, blending together and having the best of times!

I now also sing with Hereford Soul Choir, after auditioning with the amazing Jenny Frost who has the most beautiful soul voice and nurtures new talent brilliantly. She’s sung all over, including Natasha Kaplinsky’s wedding and the Albert Hall.

As a choir, we’ve now done loads of gigs at places like Lyde Court, The Courtyard’s CourtLaughing Comedy Festival, village churches and community fundraisers. Sometimes with a live band.

Even if you don’t think you’re a good enough singer, there will be a community choir out there for you. Dust down your pride and get yourself along to one of the many great community choirs. Enjoy the joy of singing. I promise, you’ll NEVER look back!