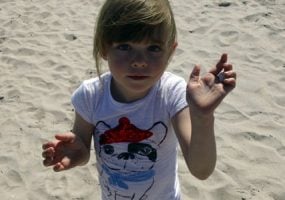 I informed my husband one day in 2003 that the next person who told me “Relax, it’ll happen,” was going to get a punch in the face! I was, of course, referring to the annoying piece of advice people who don’t have a problem getting pregnant give to those who do. I, sadly, fell into the latter category.

I come from a very large, fertile family, so it came as a surprise that for years I couldn’t conceive. My husband and I started trying more or less right after we married and every month I would be sure that this was it, and every month I’d get my period right on time. I went online to educate myself a little to see if there was more we could do to help the cause. When you discover how small the window of opportunity is for conception each month, you realise that you are getting busy at all the wrong times.

Our love life after that became a routine of temperature taking and peeing on sticks, me that is, not the hubby, although at that point he’d have done whatever I asked, crazy as I was then. When the smiley face appeared in the window it was all hands on deck for baby-making time. We tried everything in the early days, bar me standing on my head, all to no avail.

After a year we decided to seek the advice of a fertility specialist. The first and easiest thing to check was that my husband’s sperm count was normal. Let me tell you that that visit to the clinic is a weird one and a sense of humour is essential. We were shown to a room with a sofa, a TV, videos and a stack of magazines on a coffee table which, on closer inspection, showed a variety of women who looked like they could breast feed a family of 12. My husband was handed a little plastic cup with a lid and I was told I could stay and help if I wished. I could barely contain myself as she talked and the look on my husband’s face was priceless; slight embarrassment, some amusement and a hint of panic thrown in. I remember saying good luck as I wiped tears of laughter from my face and left him to it.

Next came multiple blood tests to check hormone levels, progesterone levels and any other levels they could think of. Then a transvaginal ultrasound to check the uterus and ovaries, pelvic exams to check for infections and finally a hysterosalpingogram. “A what now?” you say. A hysterosalpingogram. This beauty of a test involves a tube through the cervix and dye injected into the uterus to check for blockages in the fallopian tubes. For good measure, if your cervix won’t take the tube they insert a slightly smaller one and inflate that first. So essentially a jolly good time was had by all. My husband and I couldn’t keep up with all the names for these procedures, so in the end we called them all vaginoscopies!

Then came the drugs. I was given Clomid which stimulates ovulation (more eggs, not more often). Right around this time my husband was offered a job in Boulder, Colorado, so we packed up our two cats and our little apartment in south Florida and drove half way across the continent to our new home.

About two weeks into unpacking I felt unwell one evening and started experiencing shooting pains in my abdomen. It didn’t feel like a regular stomach ache, but I lay down and hoped it would subside. When I discovered I was bleeding we decided to head to the Emergency Room.

They took some blood and did the usual slew of tests and when the doctor came in and told us I was pregnant, my husband and I both smiled for about a second, before he told us I had miscarried. I remember asking if there was any chance and he shook his head. I asked what I should do now and he said to go home and wait for the bleeding to stop. It was one of the longest nights of my life. I kept thinking I shouldn’t be this upset; after all, I was only seven or eight weeks into this pregnancy. I realised that not only was I mourning the loss of what might have been, but, in the confusion of moving house, I hadn’t even known I was pregnant and had been robbed of that joy as well.

A few months later I found out I was pregnant again, but at about eight weeks experienced very similar symptoms to the first miscarriage. I lay on the bed willing the pains away and when I started bleeding realised another long night awaited me. After three or four hours my husband insisted we go again to the ER, which may have saved my life. It turns out I had had a ruptured ectopic pregnancy and my abdomen had filled with blood. I was rushed off into surgery leaving my white-faced husband in the waiting room. The fallopian tube was too damaged to save and was removed.

We were now three years into trying for a baby and decided to try artificial insemination. Once again my husband was handed the little cup and told to make a deposit. I came in later to be poked and prodded, but this time hopefully for a positive result. They don’t exactly ask you to do a handstand, but the position they leave you in for 20 minutes is very close. A few weeks and a couple of thousand dollars later we found out it had failed. In a bizarre twist I fell pregnant the very next month, but went on to miscarry. Even when, after all the tests, they tell you there’s nothing wrong with you, the one thing you don’t see coming with this journey you embark upon is the absolute feeling of having failed as a woman.

I remember it being June and we came to the decision that apart from adoption the only avenue left was IVF. It is so expensive in the US that we chose to go to Europe to do it, but we’d give ourselves six months to save the money and go in January of the following year. The relief was tremendous. We’d made a decision, we had a plan and best of all, no more tests, no more monitoring, no more counting and no more being poked in the hoo-hoo (technical term) by a complete stranger!

Our wedding anniversary was the next month and my husband was going to be away afterwards so there was romance aplenty in July of 2006 and, wouldn’t you know it, at 39 years old and after four years of trying, four miscarriages and only one fallopian tube, I fell pregnant with my gorgeous Charlotte who is now five. We tried for another three years for a second baby, but finally came to terms with the fact that we would only ever have this one perfect, beautiful, healthy, cherished girl, and that was okay. At 42 years old I fell pregnant with Jamie, my gorgeous son.
So, although “Relax and it’ll happen” is a fair statement, it is not advice you can actually put into practice. It has to occur naturally and without conscious thought.

See also  What do you want from your relationship?

About a year ago, at four years old, my daughter asked, “Am I the girl you always wanted?”

I said, “Of course, I waited a long time for you.”

“Well you’re the mummy I always wanted,” she replied, “that’s why you had to wait so long for me.”