The morning after the date before… and not a single warbling cartoon character or unicorn in sight. However, Charming Man and I did spend a nice evening together. 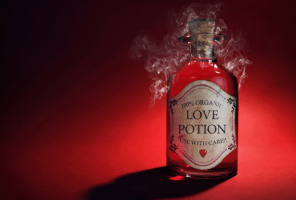 One of us might have even fallen in love. The other one is wondering if she is ever going to find her honey hunter. Charming Man would have hunted for honey for me. He would have brought me more honey than I would have known what to do with. He would have built me a beehive. I just don’t want him to.

Where did it all go wrong in transferring him from inside my computer to the outside world? He had teeth, which was a relief, albeit not award-winning ones, but a full set nonetheless. His voice was OK, although hearing him speak didn’t make me want to arch my back and bite his ear. His walk was average with no real swagger to speak of, but at least he wasn’t walking as though he had legs of disproportionate length or something wrong with his joints.

Sadly my first thought on seeing him was this: “He looks like a monk.” The dear man is losing his follicles and gaining a relocated hairline, yet cannot bring himself to shave it off and be bald and proud. Charming Man no longer has a forehead, in fact he has a five-head, maybe even a six. Ah, who am I kidding, it’s a seven-head.

I realised then that all his profile pictures had been cropped just above the eyebrow and it dawned on me that I had been tricked. Duped. Conned into thinking he was a hot bald guy when in fact he was going for ‘monk-chic’, if that is indeed a ‘look’. Being no longer ‘on-trend’ I do wonder if I am in fact behind the times with my old-fashioned view of monk-type haircuts and the like. And yet I had frivolously shaved my overgrown legs in preparation for the date, without a thought for how precious that hair might be to someone else… The irony sat with me. I was a bad person with smooth legs.

On the plus side he was fun to hang out with and easy to talk to, but my loins were numb. I even got a bit drunk and tried kissing him to see if I could wake them up. Nothing. I tried not to look above his eyebrows. Still nothing. My hope was that some fire down below would have made everything else insignificant, and that I could simply have taken a razor to his head one night thereby transforming him in an instant.

The bottom line, though, is this: it’s not about his hair or lack thereof. It’s about the chemicals and their lack therewith. However enjoyable his company was, however well he might have kissed, however much he liked me… without that one particular chemical that makes me want to point my toes and make my knickers shoot off… there is nothing.

Charming Man graciously accepted defeat and we wished each other well.

So I winked at Mystery Guy… And he winked back. All aboard!

READ  The time for love is always right now