As the first signs of spring are in the air, today we think about the next celebration on the calendar – Mother’s Day. 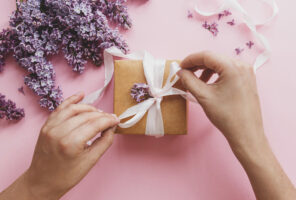 For some, it’s a chance to spoil their mums, drop off some flowers or, if they’re in your bubble, a family meal or just some time off from the chores. For others who have lost their mums, it can be a bittersweet day tinged with memories.

In the UK this year it’s on 13 March as traditionally it falls on the fourth Sunday after Lent. In the US it’s a bit later, in May. The UK name for it is officially Mothering Sunday, but we often refer to it as Mother’s Day, the American term.

How did it all begin?

The day was officially established just over 100 years ago. A vicar’s daughter from Nottinghamshire, Constance Smith, wanted to create a day to celebrate mums after reading a newspaper article in 1913.

The piece was by an American activist called Anna Jarvis, who was campaigning for an official day to celebrate mums. When Smith created the movement in the UK, US President Woodrow Wilson soon followed suit and introduced Mother’s Day in 1914.

But the tradition itself goes back centuries. It was considered important for people to return to their church – known as the mother church – at least once a year, and this happened in the middle of Lent. Inevitably, this led to families being brought back together – even small children had often left home to work, but were generally given a day off to visit the church.

And this is one of the schools of thought of the early origins of Mothering Sunday.

While many of us today might give up chocolate for a few weeks, or cut out drinking, Lent used to be taken much more seriously, with Christians observing strict fasting rules.

But these were relaxed on Mothering Sunday – also known as Refreshment Sunday – and families could enjoy eating together. And although it’s often associated with Easter, the traditional food of Mothering Sunday is Simnel cake – a fruit cake with layers of almond paste on the top and in the middle.

A day to remember

These days, the traditional family set up has developed into step families, adoptive families and extended families. Thanks to my own family dynamics, I send four cards and my kids make 10!

If you’re lucky enough to have a mother or a mother figure in your life, take the time to call or visit, or find a thoughtful gift or card. It’s the perfect opportunity to show your appreciation for all they’ve done and all they still do…