In less than a month I’ll be making the trek from Sydney to London to run the London Marathon for the second year in a row. 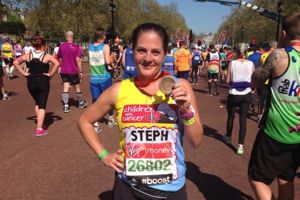 Last year during the race when I was at around the 24-mile mark I had a little talk to myself.

From memory it went something like this… “If you EVER try to sign up for another marathon – remember how horrific this is so you never try to do it again. You are NEVER running another marathon. Remember this.”

I really did. Two miles later as I crossed the finish line filled with the greatest feeling of satisfaction I’ve ever experienced, I decided the following year I was not only going to run London again but I’d also try for Paris and New York.

I hadn’t even been handed my medal and already that feeling of near death was forgotten.

Marathon running is a funny thing. It actually makes no sense. The preparation that goes into the circa four hours of running on race day is mind boggling. It takes around sixteen weeks of serious commitment and hundreds of lonely miles so that you can go the distance, which leaves you feeling like you’re losing your mind by the time the day itself comes along.

Yet there’s something so alluring about the marathon that keeps millions of runners the world over coming back. Myself included.

This year I have three to run. London, The Australian Outback Marathon in the desert around Uluru, and New York. I can’t think of three more perfect races. 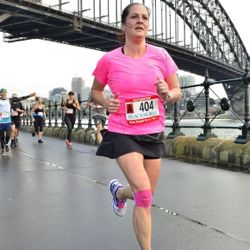 Because race day is in April it means the entirety of my training falls under a Sydney summer.

So in order to avoid the 40ºC + temperatures we often have in summer it has meant I’m frequently up before 4am to start my training before it’s too hot and humid to run. I can’t even begin to tell you how deep I have to dig to peel myself out of bed at 3.45am with a 20 mile run ahead of me. But I do it.

Don’t even start me on the spiders – my other greatest challenge at this time of year! I’ve lost count of how many enormous spider webs I’ve face planted whilst running in the dark. But then, having to continue on my run with the fear a giant arachnid is sitting on my back always makes for a bit of excitement.

Running through the pain

Now that I’ve painted a really terrible picture of how grim marathon running can be, I will say this – running has given me more than any single thing or person in my life has.

I started running when my life was in a terribly dark and desperate place and it has been my salvation. Running balances me and keeps me sane. It’s the greatest form of self care I can think of and its rewards are too many to mention.

It’s something that is very hard to put into words but running saved me. It really did.

Although I am Australian, we lived in London for many years. Three of my four children were born there. I found myself in London, the mixed-up jigsaw puzzle that was my life all fit together when I was in the UK – so being able to run the London Marathon holds extra special significance for me.

Running 26 miles along the streets that were my home for so long and passing world-famous landmarks that I was always so proud of while I was a Londoner is an unbeatable feeling.

Even though I’m pretty sure that on 26 April when I reach mile 22 I’ll be cursing that I came back for seconds!

Keep running – it’s far more than just putting one foot in front of the other.