Home / Time off / Interests / The football season’s over – or is it?

The football season’s finally coming to a close. So conversations previously banned between 3pm and 5pm on a Saturday can now be had. 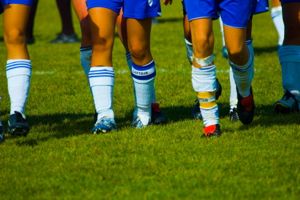 In fact, given that TV coverage of Premier League Football spans much of the weekend, and Monday nights too occasionally, perhaps conversations at all times of the week are back ‘on’.

And no Match of the Day late on a Saturday night, so no need to rush back from the party/pub/restaurant/other to watch the ever-greying ex-players dissect that day’s play.

No more Premier League until August.

Just the small matter of the World Cup to intervene, between 12 June and 13 July if you’re marking your calendar (and that doesn’t include the inevitable hype in the build up). And also doesn’t include the post-tournament forensics as to why England made a complete mess of every game and didn’t even get out of the Group stages (whatever the hell that means).

So, apart from the World Cup, no more football… unless, that is, you follow the women’s game.

The brand-new, semi-professional Football Association Women’s Super League (WSL) has just started its season, and will run from April until October. The women’s game is developing fast in the UK, while still lagging behind the growth seen in the USA.

There are over 8.5 million players registered in the States compared with 1.4 million in the UK – not dissimilar proportions given population sizes, but the US have been doing it for longer, and are ranked as the world’s number one at the moment. England, interestingly, are ranked eighth, behind some countries you’d expect, like Germany, and some you wouldn’t, like Japan and Canada.

READ  The four best countries for a romantic trip

The new WSL has 18 clubs split in to a first division of eight, and a second division of 10 (don’t ask me why!). It isn’t a complete match to the men’s game – you’ll find Arsenal, Liverpool, Everton, Manchester City, but curiously no Manchester United or Tottenham.

Instead, the FA has tried to spread the clubs geographically to maximise interest in the regions, so Notts County are there (currently occupying top spot in the League), Bristol Academy, Yeovil, Doncaster, and as far north as Durham.

If you look further down the women’s game’s structure, to the Premier League and beyond, coverage is really good, almost wherever you live.

By being new, and without the kind of tribal allegiances associated with the men’s game, the FA has tried to improve accessibility for all. Crowds are still modest, but at 1,650 at a recent Notts County home game, that’s not far behind their male equivalent attendance of around 6,750. Not sure whether the same chant of “Come on you ‘Pies” was heard at both games though…

If you have a daughter (or you are a daughter!) who is interested in playing, you’ll probably be surprised that, like cricket, women’s and girls’ football is growing fast, and there are more clubs around than you might imagine, catering for all ages and abilities.

If you’re not into football, but you’re happy to encourage your female family members, be warned: you may risk losing more than just your male partner when the Match of the Day theme tune starts up!

The FA website has the links to the local County Associations: