The British Tinnitus Association are promoting a national campaign to improve the nation’s understanding and awareness of tinnitus. 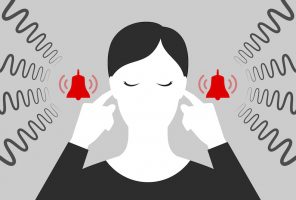 Many people think of it as a ringing in the ears – but for those affected, it’s so much more.

Tinnitus is an elephant in a noisy room, and for millions of sufferers, a serious condition which can debilitate their lives. It can disrupt all kinds of day-to-day functions such as concentration, sleeping, or even holding a conversation. It is thought to affect around 10% of the UK population at some point in their lives, and there is no known cure.

Many of us will have experienced it at some point, most typically after listening to a noisy band. But that familiar ringing we hear as we walk away from a concert, shouting at each other because our hearing has taken a dent, is usually only short lived.

One of the aims of the campaign is to challenge the perception that this is okay, because repeated exposure to loud, persistent noise can cause permanent damage within the brain.

It never ‘gets better’. It can be managed, but the damage comes with a high price – losing the joy of complete silence forever.

My experience began about 25 years ago when I had a procedure done to my ears because they were popping and causing me pain every time I flew on an aeroplane.

I had grommets fitted into both ears to act as a pressure valve. Aside from the fact that this is usually a procedure carried out on children, I could see the logic, and I didn’t anticipate any problems, only benefits. However, the ringing I could hear for weeks after the grommets were fitted never ceased as I was promised it would.

READ  The stuff of our lives

I felt cheated. It drove me bonkers, and at times I thought I might go mad. I longed for absolute silence.

Many years later, I have learnt to live with the condition. I have a number of coping strategies, and I understand the trigger points that send my tinnitus from tolerable to unbearable.

Background low level noise during the day can help, as it gives me something to actively listen to. At night, I have an alternative therapy device which makes a gentle whirring noise, masking out the noise of the tinnitus.

If things are really bad, I insert a small, hearing-aid-type device, a masker, which makes white noise. I can change the volume of the noise according to how ‘noisy’ my ears are, and crucially, this puts me in control. I can’t make the tinnitus stop, but I can reduce its ability to upset, bother or annoy me.

Other techniques such as relaxation and mindfulness are really helpful too, and again, these work by letting me taking back control of the noise I hear 24/7.

There’s some practical stuff I routinely do as well, like never wearing in-ear headphones, and taking heed when my iPhone warns me I’ve exceeded the maximum volume – but this is hard as I enjoy banging Whitney out at full blast!

Other sufferers are not quite so lucky, and there is an established relationship between tinnitus and reduced mental wellbeing. For some people, it is more than they can bear. There are specialist NHS clinics dedicated to the condition. So, tinnitus a big deal.

By understanding the condition, we can each help to raise awareness, and positively impact on our own hearing health, and that of the people we care about.

This could mean having a conversation with our children about wearing ear plugs at music gigs (don’t worry, it’s ‘cool’ in the music industry now to look after one’s hearing).  The new Plug ‘Em Campaign, has been designed specifically to build awareness of the permanent damage that exposure to loud music can cause, and encourages the use of ear plugs.