Home / Time off / Interests / The facts about… puppy farming

In August 2011 I adopted a dog, little knowing the impact this would have on me. 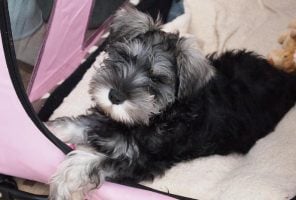 She’d been repeatedly bred from, producing a couple of litters a year, her puppies being taken away and sold into the puppy market.

My husband and I adopted her knowing that her problems would go beyond the average issues rehoming a dog might entail.

Here was a dog who’d never lived in a home, had little experience of humans, and certainly no kind ones had ever been in Susie-Belle’s life.

Seeing first hand the damage that’s done to dogs in the puppy farming industry has led to me having two books on the subject published and I now devote my life to doing what I can to end the cruel industry.

What is puppy farming?

A puppy farm can be described as a facility that breeds puppies on an intensive basis, with little or no regard for the health of the dogs, and in conditions many would regard as inadequate at best, inhumane at worst.

They’re located all over the UK. Wales has a disproportionately high number due to the rural locations that large-scale operations favour.

Disused agricultural buildings provide the space to contain large numbers of dogs, where the noise and stench can be hidden from scrutiny.

Dogs are given minimal levels of care, little attention and certainly no love. Conditions in puppy farms are often shockingly awful and yet local authority licences are still issued for them.

Large sums of money can be made by puppy farmers, and to provide more than the basics which keep dogs alive eats into the profits and won’t be done.

Susie-Belle came out in a terrible state. She was emaciated, almost bald, both eyes nearly blinded by cataracts, she had multiple infections, a prolapsed womb, and a terrified, traumatised mind. 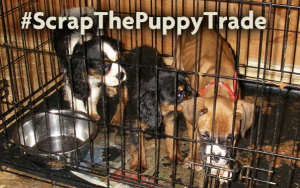 Here’s the link to the petition to scrap the puppy trade.

As the puppy business booms, it’s not just the high-volume, rurally located puppy farmer cashing in. Greedy, unscrupulous breeders are thriving in a poorly regulated industry with woefully enforced welfare standards, with some keeping dogs in suburban houses in cages and sheds.

Join this with the growing trade in imported puppies from European puppy farms and the criminal gangs that are posing as puppy breeders and the problem becomes distressingly clear. It’s a terrible trade worth millions of pounds to those involved and utter misery for the dogs.

During her years in the puppy farm, Susie-Belle’s many puppies would have been transported over hundreds of miles, most likely ending up in pet shops or garden centres, or being sold via online advertisements.

Puppy dealers buy in from large-scale facilities and sell to the public, often from residential homes, pretending that they have bred the puppies themselves.

The harm that the breeding industry inflicts on dogs is a great disgrace in our society, one that’s only possible because puppy buyers are continuing to provide a ready market.

If you’re thinking of buying a puppy, here’s how to avoid supporting the puppy farming trade:

READ  Book Club: The Beekeeper of Aleppo by Christy Lefteri

The only guaranteed way to avoid contributing to the puppy business is to rehome from a reputable rescue centre.