Home / Time off / Culture / The celluloid ceiling: women in film 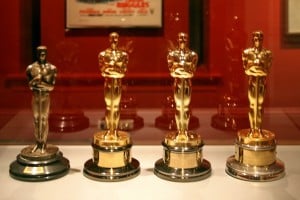 This week, Carla Bruni’s sister Valeria Bruni-Tadeschi is competing in Cannes with her film A Villa in Italy, so the guerrilla girls of La Barbe won’t need to crash it again.

Last year not one of the 22 competition invites had female directors. Fewer than a fifth of all creative posts in the 250 top grossing Hollywood films of 2012 were women, and in indie cinema, which one might think less misogynistic, it’s less than a third. That’s according to Nikki Baughan, editrix of movieScope, and The Sundance survey.

Why? Is it because women aren’t good at making films? Because women don’t go to the cinema or aren’t interested in film? Because film requires male skills and attributes? Or could it be that the film industry is male-dominated and women have a very hard time breaking into it? Hmm. I wonder.

Actually, 50% of all film school grads are women, and women predominated men in early cinema before it became financially attractive. Big bucks came and men followed.

How things can change

As in most fields, women who want to be successful in film have to be better and more financially-aware than their male competitors. Mary Pickford was one of the original ‘United Artists’, along with Douglas Fairbanks, WD Griffiths and Charlie Chaplin. It’s the same in Bollywood, with astute director/producer Kiran Rao and director Reema Kagti (Vanity Fair 2004) finding success through collaboration, according to Ashanti Omkar.

Women long-marginalised in Korean film appear keen to ride the Han wave. Park Chan-Ok introduced her disquieting Paju (2009) at the 14th Pusan festival; a woman is torn between love and hatred for the same man in a film of rich contradictions and wandering souls.

The truth is that the under-representation of women in this art form is robbing it of richness and diversity. Heard of any of these: Gillian Anderson, Jennifer Aniston, Asia Argento, Patricia Arquette? Like Geena Davis, they’re all directors. Yes, but you probably just know them as actresses. And that’s just the ‘A’s.

Let’s move onto ‘B’. Kathryn Bigelow was slated to inspire female directors when she became the first female Best Director Oscar winner with The Hurt Locker, 2010 (it only took 82 years). But even after The Widowmaker, and Zero Dark 30, ‘The Bigelow Effect’ actually presided over a decline of female film makers, from 9% to 5%.

Women aren’t only under-represented at the Oscars, either – there is a dearth of women writers, producers, editors, cinematographers, critics and even costume designers. Look who’s writing this column.

What about ‘C’? Before her wistful Bright Star, 2009, and before Bigelow clinched it, Jane Campion (pictured) was one of only three women ever to be nominated for best director (for her ethereal and powerful The Piano 1993). Lisa Cholodenko (The Kids are All Right, 2010) has a take on all this.

You know, I get asked why there aren’t more female directors all the time. I’m kind of reluctant to talk about it. That’s not because I think the question is irrelevant or stupid. It’s just that there are so many mitigating factors. Here, the dollar is the final frontier and it’s men who are typically attracted to the kind of material that brings in the masses: comic books, thrillers, special effects. Women tend to be more interested in character, in psychology. Are there women out there who are rabid to make those kind of movies? (The Soska twins anyone?) I don’t know. Maybe. Maybe they just can’t get into the system. But that’s not at all my sense of what’s happening.

You know, men should watch Cholodenko’s 1998 sensuous, sensitive High Art to learn what it takes to satisfy a woman. And then they’d know why we need the subtlety of women in film.