If you believe everything you read, growing up in the 1950s was a miserable grind. 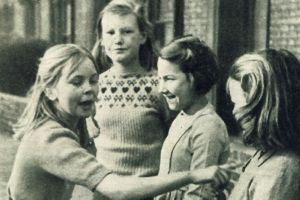 ‘O-U-T spells out!’. For a trip down memory lane try this website History World or just click on this image.

And, as my friend and I were mulling over the numerous books we’ve read about growing up in 1950s poverty, we agreed that none of them seem exaggerated or unlikely to those of us who experienced this era within a working-class family.

But, as I dunked my toast into my tea, I reflected on how I felt that this worst of times was actually the best of times in helping me to develop a resilience which has affected my adult life.

“In what way?” asked my mate, adding three spoons of sugar to her tea.

“Well, you know”, I explained, “not being able to afford light bulbs in the bedroom as a child was a great help when I became a night nurse!”

We both giggle conspiratorially at this shared memory, and I reach for another slice.

When I think of my childhood home, the most evocative memory I have is of our back door, which had a huge latch, and the base of it had a four-inch fringe like the hem of a country dancer’s skirt. The upside of this was that we never had to get up to let the cat out, as he could crawl underneath when he wanted to go out on the prowl.

Nothing was handed to you on a plate. When I wanted to join the Girl Guides, my Mum told me I could go if I could get my own uniform. At 11 years old I couldn’t get a job, so adapted what I had. My grammar school beret had a proud gold badge with a Latin insignia on the front of it. 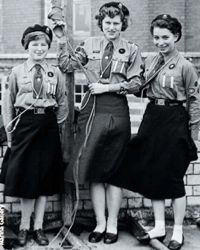 Guides dressed in what became known as ‘Guide blue’.

Luckily it was navy blue, so I simply turned it round and sewed the Guide’s badge on the back, turning it around to display the appropriate badges for each situation.

No one ever seemed to guess that my reluctance to remove my cardigan on warm days at school was related to the numerous guide badges I had sewn on the blouse sleeve underneath! It was lucky for me that both organisations favoured navy and saxe blue as their colours. This was when I realised that it was possible to blag your way through some situations.

It wasn’t uncommon for children from larger families such as mine to experience almost complete, unsupervised freedom of movement. I learnt to swim the first day I entered a swimming pool, aged ten, where I had gone with my school chum. There were no lifeguards in the outdoor pool, and the only employees were the staff at reception, taking the cash, completely out of
sight of the pool.

We gingerly entered the shallow end, where we were instantly mobbed by the neighbourhood bully boys, who repeatedly ducked us under the water until we were gasping for breath. In desperation, on surfacing, I walloped my attacker on the nose, and while he held his shocked and bloody face, I swam to safety. Believe me, we both swam.

This didn’t put us off what was one of the very rare entertainments available, and we practised our swimming until we could out-swim the bullies with ease.

In later years, when I watched my children at their weekly swimming lessons, where they were treated so delicately that it took them about a year to learn to swim, I did often smother a smile at the thought of just picking them up and throwing them in the deep end!

As our home was very small we were always sent out to play regardless of weather or daylight. I regularly attended every church in town. Cof E, Baptist, Pentecostal, Methodist, Plymouth Brethren and Roman Catholic. This taught me one of the most important lessons in life – that people’s behaviours are far more important than their beliefs. 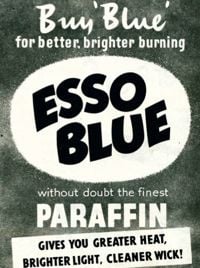 When my eight year old sister and I had walked for miles into the countryside, and hitch-hiked slowly and unsuccessfully home, my mother’s greeting to us at 11pm was to shout at us for keeping her up so late, then her storming off to bed. Don’t expect sympathy and you won’t be disappointed!

But I learned the joy of solitude in our outside toilet at the bottom of the yard. Sitting there in the light of the paraffin lamp (which was lit to stop the pipes freezing), reading the newspapers which were torn into squares, I experienced a very deep contentment which I try now to replicate through meditation.

I have no idea what a middle-class childhood would have been like, as I only hear other people’s stories. I certainly don’t want to romanticise poverty; it is cold, hungry and difficult.