It’s been four weeks since I ran my second London Marathon and I’m still on a huge high. 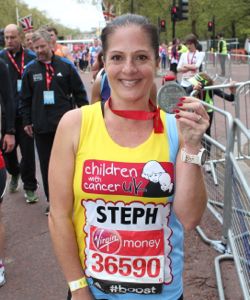 I keep reliving moments throughout the race and every time I remember that feeling of crossing the finish line I get a rush of feel-good chemicals. It really is the best feeling in the world accomplishing something like the marathon.

I went into this year’s race in less than peak condition so I knew somewhere along the course my injury would flare up and give me enormous grief, I just didn’t know at which point.

I was guessing around 19 miles. Oh how wrong I was and at 13 miles my knee pain began.

It was awful. All that preparation, all those excruciating massages – I had done everything I could to ensure a good race but the running gods just weren’t with me that Sunday.

As I ran through Rotherhithe I knew I had friends waiting there for me and I ran into my friends arms telling her my knee was dying.

She looked me straight in the eye and said “keep going, I know you’ve got this, now go.” So go I did.

Looking back I have to say that the memory of how painful the last third of the marathon was is fading – although it consumed me at the time – and the great memories are shining through, along with some pretty hilarious ones.

Like the Asthma Foundation runners trotting along wearing full head-to-toe ventolin costumes. Or when I saw Jesus. He was making good pace towards the Cutty Sark wearing no shoes, a loincloth and a thorn crown. Oh and he was carrying an 8ft wooden cross.

For the record he did not beat me to the finish line, like the mustard bottle did last year. Neither did the Tardis, or the giant Mona Lisa painting, or even the massive telephone.

I have to say the costumes were even better than last year, but then again I spent about five miles last year running behind a mostly nude man with a really hairy bum wearing a mankini so the bar didn’t have to be raised very high.

I’m not going to bore you with the details of what happened next with my injury or even the last 10km of my race because the most amazing part of my day happened at the finish line. 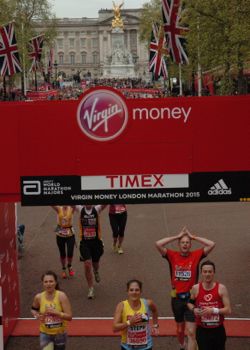 I did finish, despite my dodgy knee and the fact that I took painkillers from a total stranger at mile 22 and didn’t even bother asking what they were or washing them down with water (I was desperate and he didn’t look sinister).

Just don’t tell my mum, she will freak, as I am quite sure when I was about four she taught me not to accept sweets from strangers.

However the best part is that even with my dodgy injury, I only finished thirteen minutes slower than last year so I’m taking that as a big fat win!

Last year, as I stormed across the finish line, I stopped to ask a stranger if he could take a photo and he did. He then asked me to take one of him but when he gave me his phone his battery was dead. So I took his photo and promised I’d email it to him, which I did – so over the course of the last year we’ve kept in touch and swapped stories for this year’s marathon.

See… the marathon spirit. What a beautiful thing it is!

This year, I tapped on the shoulder of a woman behind me and asked her to take my photo. When she turned around she said ‘Oh you’re Mama Marmalade, I read your blog! I love all your stories of how much you love London and your running posts are great‘. Her name was Fi and she was just so lovely and I was so blown away.

Of the 30 something thousand runners there that day, I chose her.

We hugged and were both really emotional and if you’ve ever run a marathon you’ll know at the finish line you’re a bit delirious and say stupid things like ‘you know what, I don’t even like marmalade‘ (I really did). 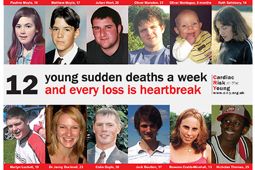 Cardiac Risk in the Young homepage

So as we stood there half laughing half crying, she burst into tears and said ‘I’m so sorry, I’m just really emotional. I was running this for my boyfriend, he died last September while he was running a half marathon. We were meant to do this together so I knew I had to do it for him‘.

Then I burst into tears. I was just so touched by her story and her emotion. I found out later her boyfriend James died from an undiagnosed heart condition and she was running for the charity Cardiac Risk in the Young and she raised over £18,000 – James was only 27 years old.

After the race I couldn’t stop thinking of Fi. I knew she followed me on Instagram – I searched for her to sponsor her and contact her later. She had a profound impact on me that I can’t explain and since we met we’ve emailed so I could share her story with her permission and also raise awareness for the wonderful charity she raised so much money for.

Everyone has a story. Everyone is fighting their own battles and everyone has a purpose. I would love to hear every runner’s story that took part in this year’s marathon because more often than not people run marathons for specific reasons. Running 26.2 miles isn’t something one just does for no reason.

My running story isn’t unique. Running definitely saved my life but I know quite a few other people who discovered running when they were in crisis not dissimilar to mine.

Long-distance running filled such a huge void in my life where nothing else would fit. Like a jar of marbles, full but also full of gaps. Imagine pouring water into those marbles, it seeping into all the little cracks and spaces. That was what running has done for my life. It filled all the bits that I could never fill otherwise.

I’ve said it before and I will say it again, running is truly a gift and I am full to the brim with gratitude that it found me.

My 2015 London Marathon experience was incredible. It was worth the 17,000km plane trip. It was worth the long hot summer of training living in Sydney. It was worth it all and even with the injury I wouldn’t change a thing (except next time if I was going to accept drugs from a stranger I might just ask what the tablets are before I swallow them).