As the year draws to a close, it’s a time when many people reflect on the past, look forward to what the year ahead might hold and perhaps set some goals or challenges for the coming 12 months. 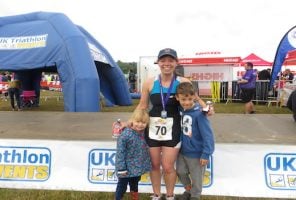 It was about this time last year I decided that in 2015, at the age of 42, I would take on a challenge that was a long way outside my comfort zone. My first triathlon.

A triathlon consists of three disciplines one after the other: a swim, a cycle and a run. That alone would have been enough of a challenge for me, but I also decided not to take the easy option of a pool-based triathlon, instead choosing one with an open water swim – a pretty daunting prospect for someone who had never been a good swimmer.

There were several reasons why I decided to do a triathlon.  First, after knee surgery at the end of 2013, I needed a goal to work towards so that the months of physio would not be wasted.

Second, I wanted to take on a challenge outside my comfort zone to raise money for Pregnancy Sickness Support, a charity that supports women suffering from pregnancy sickness and its extreme form, hyperemesis gravidarum.

It’s a charity that means a lot to me as I suffered from hyperemesis gravidarum during both my pregnancies and I am now privileged to be a trustee of the charity.

Finally, I wanted to show my children that you don’t have to be the best at everything, but you can achieve anything if you set your mind to it and work hard.

So, after months of hard work and training, on 19 July 2015 I achieved my goal! Crossing the finish line is a moment I will never forget.  I loved the whole experience. In fact, I have since done more events and am now planning a longer distance triathlon in 2016.

You could say I have been bitten by the triathlon bug! 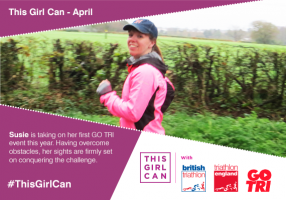 I am not alone in finding the sport of triathlon after 40, as it’s one that many people come to later in life. Perhaps they are already a runner, swimmer or cyclist and want a new challenge involving one or two new disciplines.

Or maybe it’s because training can be slotted in around a busy lifestyle.  For me, training for a triathlon was ideal as I was able to fit it in around my young family and work commitments.

Training in three different disciplines also meant that I did not put too much strain on my knee and I never got bored.

To anyone who is thinking of giving triathlon a go, my advice would be to go for it.  If a full-on triathlon sounds too daunting for you there are other, less scary, options out there.

During my training I discovered GO TRI, an initiative run by Triathlon England, funded through Sport England, aimed at getting more people involved in triathlons, duathlons and aquathlons for the first time no matter what their age or ability.

GO TRI events are low key and reasonably priced and I have completed several of them this year.  If you have never done a triathlon before and feel a bit nervous about it, GO TRI is a great way of having a go in a low-key environment.

READ  7 ways to motivate yourself to keep working out regularly

Everyone is very supportive and it doesn’t matter how fast or slow you are or what kit you wear. And you never know, you might get the triathlon bug like me. 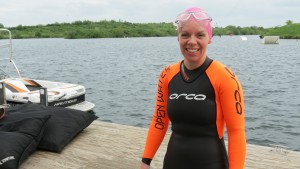 If you’re toying with the idea of taking on any kind of physical challenge in 2016, here are some of the lessons I learned from my own triathlon challenge:

Don’t underestimate yourself. You’ll be surprised what you can achieve if you put your mind to it and work hard.

Pick something challenging but achievable. Choose a challenge that’s outside your comfort zone but also be realistic about how much training is involved. Consider your own lifestyle and other commitments, decide what time you will have available to train and choose your challenge accordingly.

Sign up for an event. Having a particular goal to aim for is a great way to focus your mind and stay motivated.  There’s nothing quite like the date of an event looming to keep you motivated, whether through excitement or sheer panic!

Join a club. It’s easy to find reasons not to train. Maybe it’s cold and wet outside, maybe you’re feeling a bit tired that day or maybe there’s a bottle of wine with your name on it. Whatever the reason for not wanting to put your trainers on, joining a club can really keep you motivated. It’s great sharing your experiences with others and the camaraderie and encouragement you get will spur you on. Not only that, but you’ll probably make a great bunch of friends, too.

Enjoy it. On the day, don’t worry about how fast you are or what position you come in. Try to relax, enjoy the event and cross the finish line with a big smile on your face. And don’t forget to ask someone to take lots of photos!

READ  The stuff of our lives

Finally, make sure you have another goal in mind. After the initial high of completing the challenge you have worked so hard for and focussed on for so long, it’s very likely that your mood will take a nosedive and you will start to feel flat shortly afterwards. The answer is easy – sign up for another event as soon as you can.

If you would like to read more about my triathlon journey, I have written about it on my blog.

And, if you’re thinking of taking on a challenge in 2016, go for it. You won’t regret it. Good luck!